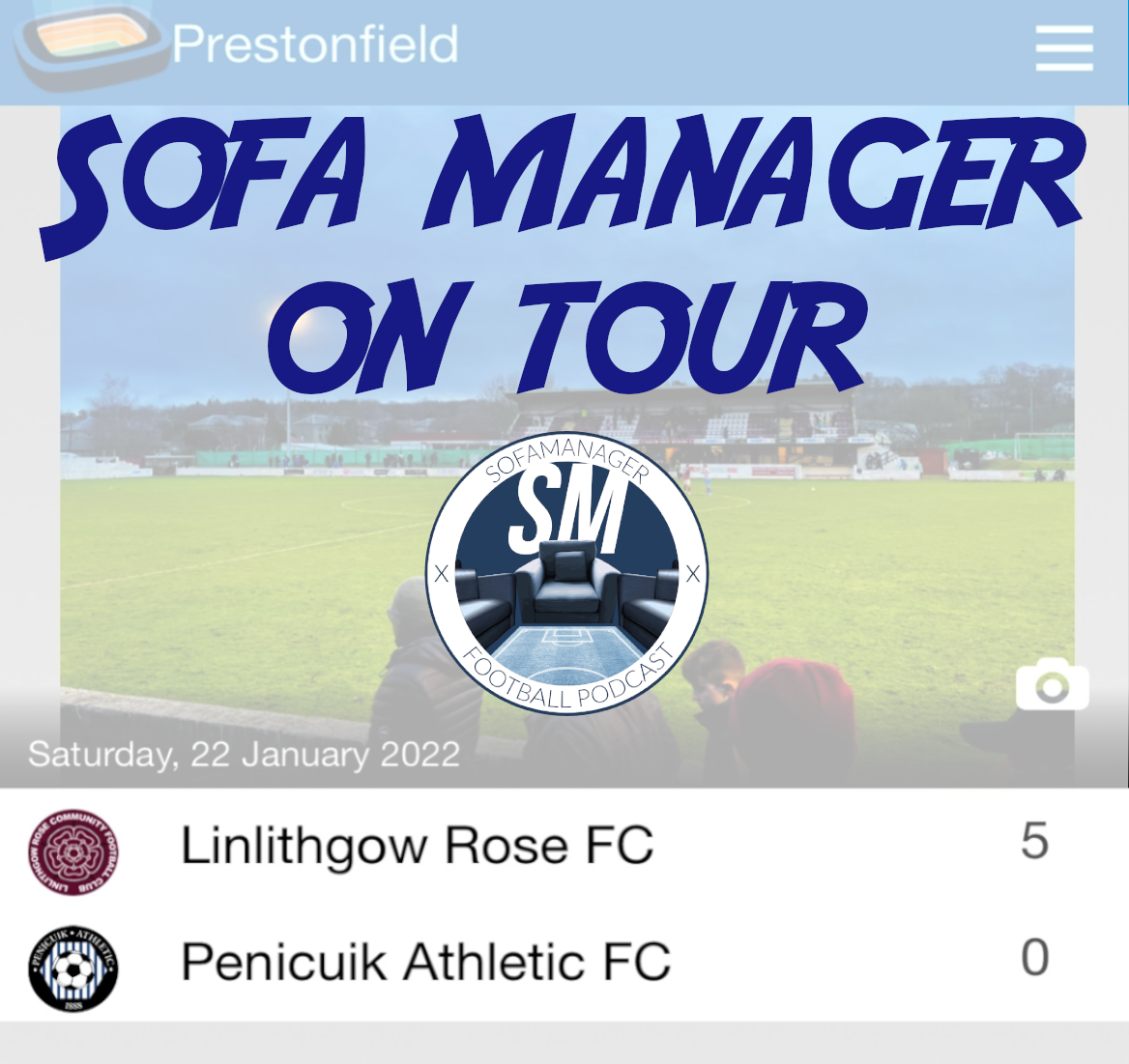 So last week was my first week back in the working world. No longer am I unemployment statistic, a negative in the national psyche, the scourge on society. I am back to being a working man earning my bread – or in this case a pie and a tea – which is a nice feeling. And to celebrate, Linlithgow Rose versus Penicuik Athletic in the East of Scotland Qualifying Cup 4th Round was the place to be with the old Sofa Manager muckers Paul and Darren.

Bit of an unusual approach to a game this weekend. 9 times out of 10 I’m driving which, for legal reasons, rules out pints either before or after the game. This weekend was different. Linlithgow presents a golden opportunity to make a real day of it with plenty of pubs in the town; and if you’re keen there’s the notorious pub crawl The Linlithgow Trail. So it was the train into Linlithgow and a 15 minute walk heading away from the town to Prestonfield.

While this was a Cup game it was also 2nd versus 1st of the 2 two sides atop the East of Scotland Premier Division. Both teams having played 22 of the 34 fixtures, Penicuik are a mere 1 point ahead of Linlithgow with Tranent tucked in 3rd place and a game in hand. Super exciting! Both sides had a bye into the 2nd round, Linlithgow so far have defeated Spartans and Dalkeith Thistle, while Penicuik seen off Hawick and Blackburn. I’d also imagine the pair felt a shot at the East of Scotland Cup was realistic.

The Game: Linlithgow Lord Over Penicuik

Make no mistake, this was a commanding performance from Linlithgow as they thrashed Penicuik 5-0. Spoiler alert! The opening goal came after 12 (twelve!) seconds and without Penicuik touching the ball. From kick-off, Linlithgow broke through with Mark Stowe played through to score. It’s not very often you see that and I’m really struggling to think if I’ve seen a quicker goal scored. And while it was extremely funny to see a side concede so soon, I admit there was a moment of this better not finish 1-0 (Paul’s negativity).

Penicuik could have equalised not long after when the Rose ‘keeper forgot he wasn’t Manuel Neuer as he rushed out his box and completely fluffed his attempted clearance. Lucky for him the ball fell on the outside of the post. McKenzie then scored the 2nd of Linlithgow’s 5 goals. Stowe again involved as his inch-perfect pass put it on a plate for McKenzie to dink the diving ‘keeper. A little lucky perhaps as the ball deflected off the post to then trundle in.

Penicuik were still in the game at this point. A shot battered into the side netting prompted some running black tape and running repairs – another first seeing that – along with a goal line clearance gave the away side some kind of solace…right up to giving a penalty. Ogilvie ripping through a pathetic Penicuik defence finally seen him stop when Lamb chopped him down in the box (see what I did there?). Stowe stepped up choosing power over placement to crack the crossbar and miss. Bit of a shocker for an otherwise relentless 1st half.

Bremner got the 2nd half off to a great start for Linlithgow as he managed to prod home a lovely chipped pass from Thomson. The Rose now 3-0 and cruising. By this point we’re asking ourselves whether this was a full-strength Penicuik side; we’re still none the wiser. Goal number 4 did come from the spot. Stowe was too quick for the Penicuik defender and clipped just inside the box. Learning from the error in the 1st half, Stowe scored this time round. This was too easy. And rounding it off was substitute Sneddon who, again, was slid in and tapped the ball beyond the floundering ‘keeper.

I genuinely don’t know if it was, but if that’s the best team Penicuik can put out then that’s a real hammer blow. They were dreadful. Slow in the middle, all over the shop at the back, growingly agitated – understandably – as the game went on, gave away two penalties, and conceded five goals. If that’s not a bad day at the office I don’t know what is. On the flip side, of course, is how well Linlithgow were.

I don’t like the retort of the opposition were rubbish so winning so comfortably was a formality. The Rose were relentless in the game. You have to give them huge credit for the pressing they put on the Penicuik midfield who couldn’t cope with the pressure. That then leads to a fantastic Mark Stowe and McKenzie up front to quickly and decisively break through. I am of the opinion now both could take a step into the lower half of the Lowland League and potentially with Linlithgow next season.

But What About the Pie?!

Of course, the pie. The real reason why I’m at the game in the first place. The last proper pie rating was done at Broxburn Athletic last weekend which scored a handy 7 out of 10. Full disclosure, I was at Hearts v St. Johnstone midweek and had a very underwhelming Scotch pie at a ridiculous £2.60 and a rating of 3 out 10. At £2.60 I expect a very respectable 7 out of 10 pie; this was more like a cheapy 4 out of 10 I’d pay no more than £1.90 for. Premiership prices ae?

Sorry that was a bit of rant. The Linlithgow steak pie at £1.70 and a tea at £1.10 was pretty decent. Exclude dinner and several pints post-match that’s basically an afternoon of entertainment for less than £10 with entry being £7. I’ve given the pie a 6 out of 10 with the crust just a slight bit dry putting too much pressure on the beef. The beef itself was very tender, cooked well, and a healthy filling. A slight improvement on the pastry and it would be riding up there with Broxburn at a cheaper price and thus the superior pie. Hearts should get in touch with the suppliers!