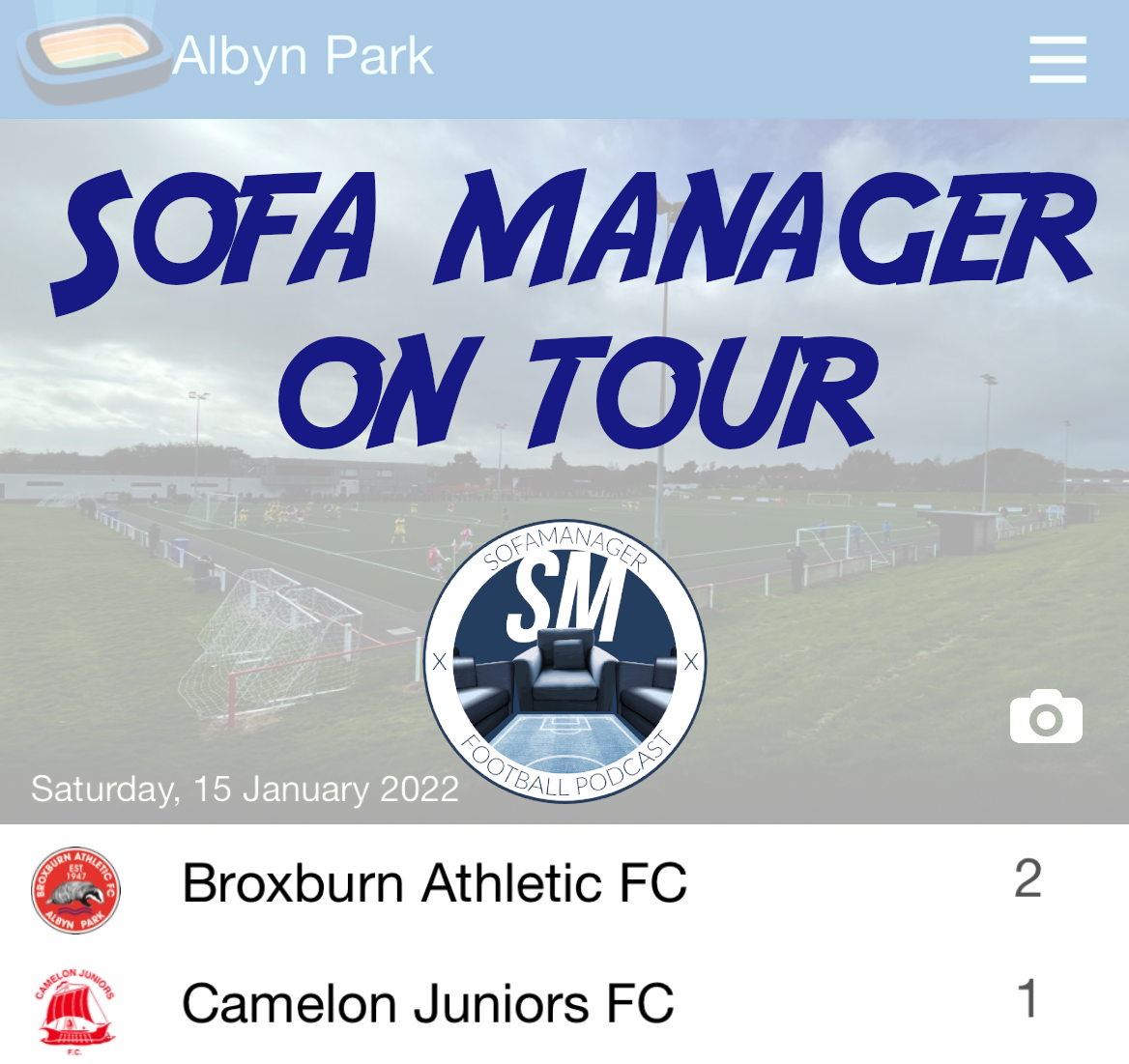 Game 2 of 2022 and it’s been a bit of a stuttering start to the Groundhopping year. Between East Stirlingshire v Bo’ness United being postponed on New Years Day to whinging at myself about how cold and miserable it looks outside; it’s been tough getting myself out the house. Granted I did manage to attend Stenhousemuir v Stirling Albion on the 2nd January and that was a thoroughly entertaining fixture. This weekend, however, I had to do something. I start my new job on Monday and what better way to celebrate than some East of Scotland action at Albyn Park.

Home to Broxburn Athletic in West Lothian, Albyn Park is a pretty standard example of stadia for the East of Scotland leagues. A shed/covered terrace covers the first half of one side with a new(er) clubhouse covering the latter half. An old versus new style if you will. Okay I’m not describing this particularly well – perhaps the picture from the other side gives a better idea of what I’m rambling on about! Surrounding the remainder of the park is grassy banks and peculiarly placed park benches which, to me, is a terrific idea. The far side is also bounded by the canal and standing up on the bank gives a tremendous view out to the Pentland Hills. The old story that if it’d been 20 degrees warmer and beer was allowed it’d be very difficult not to be at peace with the world!

I’m not entirely sure when it was installed but I would love to find the person who placed the artificial pitch. For some reason the pitch is acres away from the aforementioned terrace and I’m stumped why. By no means is it a huge deal but it’s odd; quirky even. Plastic pitches seem to be common in the East of Scotland (that I’ve seen so far) which does make for a better watch. I appreciate that when you get to a higher level a grass pitch should be a prerequisite; but plastic at this level just makes sense.

Everyone loves a rating so let’s go for it. Out of 10, I’ll give it a 6. I love the seemingly random placement of benches round the grass verges. In a summer league it’d be like the Still Game episode Hot Seat with everyone fighting for one! The new pitch, floodlights, and building do make it feel fresh and I rate that they’ve kept the old shed in tact alongside some of the old railings. I’d go back for sure!

Not a classic, I would say that. But I don’t mean that in a ‘aw I should have stayed in and watched City v Chelsea’. It just didn’t light the heather. Camelon were the better side in the first half and deserved their 1-0 lead at half-time. The ease in which they attacked down the left was incredible and where, ultimately, the goal came from. Lewis McArthur roaming into the Broxburn box completely unopposed to head the opener. Quite incredible defending for all the wrong reasons!

Second half turned out to be a different story. Broxburn came out looking a far better side and started to utilise their two strikers. The home side were awarded a blatant penalty 5 minutes after the restart to which Greg Binnie battered down the middle. It sucked the life out of Camelon who really struggled to get started in the second half. The winning goal came within 10 minutes of the penalty. Pretty meek defending from Camelon gave Binnie a chance to tap the loose ball in from 6 yards out.

Camelon did create a few decent chances afterwards. McArthur was a bit unlucky with a looping header but it just wasn’t enough. Indeed Broxburn could’ve made it 3-1 with an outrageous attempt at an overhead kick forcing the Camelon ‘keeper to tip the ball over for a corner. A moment that, if it’d went in, would’ve had the non-league Twitteratti going berserk! The Broxburn second half performance merited the 3 points staying at Albyn Park in my view. For Camelon, I think they will be frustrated not to have done more in the first half and giving the penalty away in the first place, never mind so soon into the second half.

The Pie and Final Thoughts

The single most important factor of any level of Scottish football is the pie. It’s too easy to slap on an out of 10 rating without giving some logic to it; so I rate on a sliding scale of price versus quality. You don’t get this level of research anywhere else, probably…

I’m giving the Broxburn steak & gravy pie a 7 out of 10. At a price of £2 it’s absolutely value for money with tender chunks, actual gravy – not dried out – and a very decent crust. A little cool but that’s my fault for waiting until half-time to spring for one. A 7 out of 10, given the highly complex mechanism, puts it above average by 2.5 points for price versus quality. For £2 I would be expecting a meh 4.5 out of 10. I would also say the high-risk strategy of advertising the butcher beside the pie stall paid off. If I lived in Broxburn they’d have my attention.

Writing this on Sunday morning I have to say I’m very glad I went. The £8 to get in was worth it for the fresh air and a decent bit of entertainment. And Albyn Park is now another ground ticked off the list taking me to 5 out of 18 in the East of Scotland Premier Division, 48 different Scottish grounds, and 77 worldwide. I do intend on going back and hopefully closer to the summer months to properly enjoy those open grassy banks.