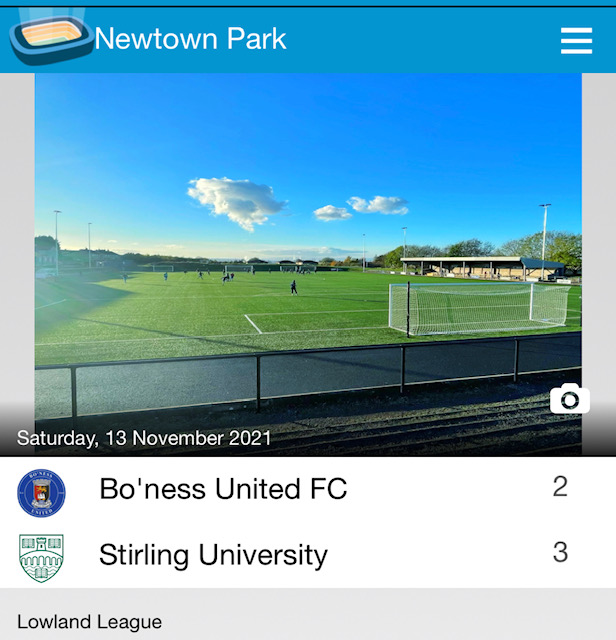 It’s been a long time since I’ve managed to pull myself together and actually blog about a matchday experience. There’s certainly been plenty of chances (and far bigger games to talk about) but there’s been a mental block I’m now overcoming. But we’ll park the bleeding heart rhetoric for the moment as I look back on my return visit to Newtown Park and Bo’ness United. They hosted Stirling University in the Scottish Lowland League with both sides jobbing around mid-table heading into the fixture.

I’ve been to Newtown Park quite a few times, however the last visit was in May 2018. Back then it was a grass pitch and Bo’ness playing in the East of Scotland League system. It has changed a bit since then. The new AstroTurf and railings put around the park do look pretty good and modern. But don’t be fooled – the stadium is still a cross between apprentice-grade concrete and good ol’ fashioned terraces. The wee pie hut would have an SPFL Health and Safety steward wincing but frankly they can get ti…

From memory the biggest game I’ve been to at Newtown was against Cowdenbeath in the Scottish Cup 3rd Round back in 2011. Over 1,000 fans in the ground, Cowden won 3-0, and Bo’ness finished the game with 9 men. Wild to think that the stadium can allegedly hold 2,500 when it was pretty cosy that afternoon. Back then the old Grand Stand would have been visible (though potentially not in use) before it was torn down in 2012 due to Asbestos. And that’s not the only inadvertent remodelling to have happened. A huge fire ripped through an adjacent building and turnstile entry in 2019 with the burnt out skeleton still visible.

If we’re giving it a rating out of 10, I would give it a 7. It’s above average for me because I do like the end banking where I stood on Saturday which gives a good view of the game and right down into the Forth Valley. Yes, it’s absolutely not modern but to a degree that’s the point. I believe there are some renovation plans coming up which I hope is more to do with putting new slabs down rather than ripping anything out.

For Bo’ness this season is a relatively special one. They won promotion from the East of Scotland Premier Division last term following the branching out of the Scottish Football Pyramid a few seasons ago. To now be in the Lowland League, I understand, puts them at their highest position in Scottish football land since the 2nd World War when they were classed as a Professional Side, rather than Junior.

Not to say they weren’t a crack Junior side; indeed one of the best in the old Junior East Super League. But the potential to step up a level, in theory, is interesting for the club. The new pitch fits well and I hope they establish themselves in the division. Awkward to raise but I hope Linlithgow Rose aren’t far behind them for that big rivalry to return.

As for Stirling Uni, a founding member of the Lowland League in 2013, they’ve broadly been hovering around mid-table in the Lowland League for the previous 4 seasons. As you’d expect the squad is student-based but with a few outsiders mixed in. Stirling Uni are probably more known for hiring Shelley Kerr in 2014 to become the first female manager to be appointed in Britain.

Spoiler alert, it finished Bo’ness United 2-3 Stirling University. Quite a good game but I left both incredibly cold and a little annoyed. In theory I was there as a neutral but as a local(ish) lad I did want Bo’ness to win. Don’t get me wrong, Stirling Uni did deserve to win in the end but still a little frustrating. Stirling opened the scoring after some shambolic defending allowed Jamie Penker to slot the opening goal. And when I say shambolic defending it really was terrible.

Stirling Uni’s second was even worse from Bo’ness. Loose possession from the home side in the midfield meant Stirling could run through them with ease and Penker in again to round the ‘keeper to make it two. Again, good to watch and glad of the goals but at that point I thought Bo’ness were in for a scudding.

But they got their finger out after that. Bo’ness had the ball in the net but for a dubious offside decision. Salt in the wounds? Nah motivation. Two minutes later United had one back Greg Skinner getting the final touch. And they had a couple chances afterwards which gave a bit of hope going into the break. At half-time, Bo’ness 1-2 Stirling, it shaped up to be a good second half. But drama…the sun was setting, I’d forgot to lift my jacket, and my still Southern Softie [recently moved back from London] attitude to the cold was kicking in.

62 minutes played and Bo’ness were level and justly deserved at the time. Matty Flynn managed to work his way into the box and fire low in the equaliser. #scenes. Okay, not quite, but Stirling hadn’t started the second half well and Bo’ness were on top. There were calls for a penalty for the home side but I wasn’t too convinced. In the voice of Michael Stewart I’d need to see it again before sticking my neck out.

For everyone in Bo’ness – except me and the Stirling Uni contingent – were even more rattled when James Stokes headed the ultimate winning goal. The equaliser sparked the Uni team back into life and with a fragile Bo’ness defence they took their chance. The third goal killed off Bo’ness who looked really deflated after that. This is when I really ought to have written things down. Going into the final 15 minutes Stirling’s attack looked pretty decent. A lot of nice footwork and taking their man on was great to see. By that point, and going back to what I said earlier, Stirling Uni merited the three points. It’s now whether they can build on that.

God I love a pie, or any pastry-related good, and I’ve been debating how best to measure and thus rate said pastry. We’ll keep it simple; for every 10p spent, I’d expect an increase of 0.5 in quality. If the pie costs more than £3.10 they can bolt while I absolutely will not trust a pie that costs less than £1.10 at the football. For Bo’ness as inaugural Sofa Manager Pie Rating entrant I’ve given the Scotch pie a 4 out of 10. For £1.40 it was reasonably priced but similarly not great quality. And to be obtuse here’s a graph!

An enjoyable game with plenty of goals, tough challenges, a reasonably priced pie and coffee, and terrific November weather. Well, at least when the sun was out. There’s no question I’ll be back for a good few fixtures in 2022 and beyond. If you’re after a more relaxed viewing experience and the opportunity to either unwind on your own, or catch up with a mate for a chat, then head to the Lowland League. You will not regret it! Just look at that sky!