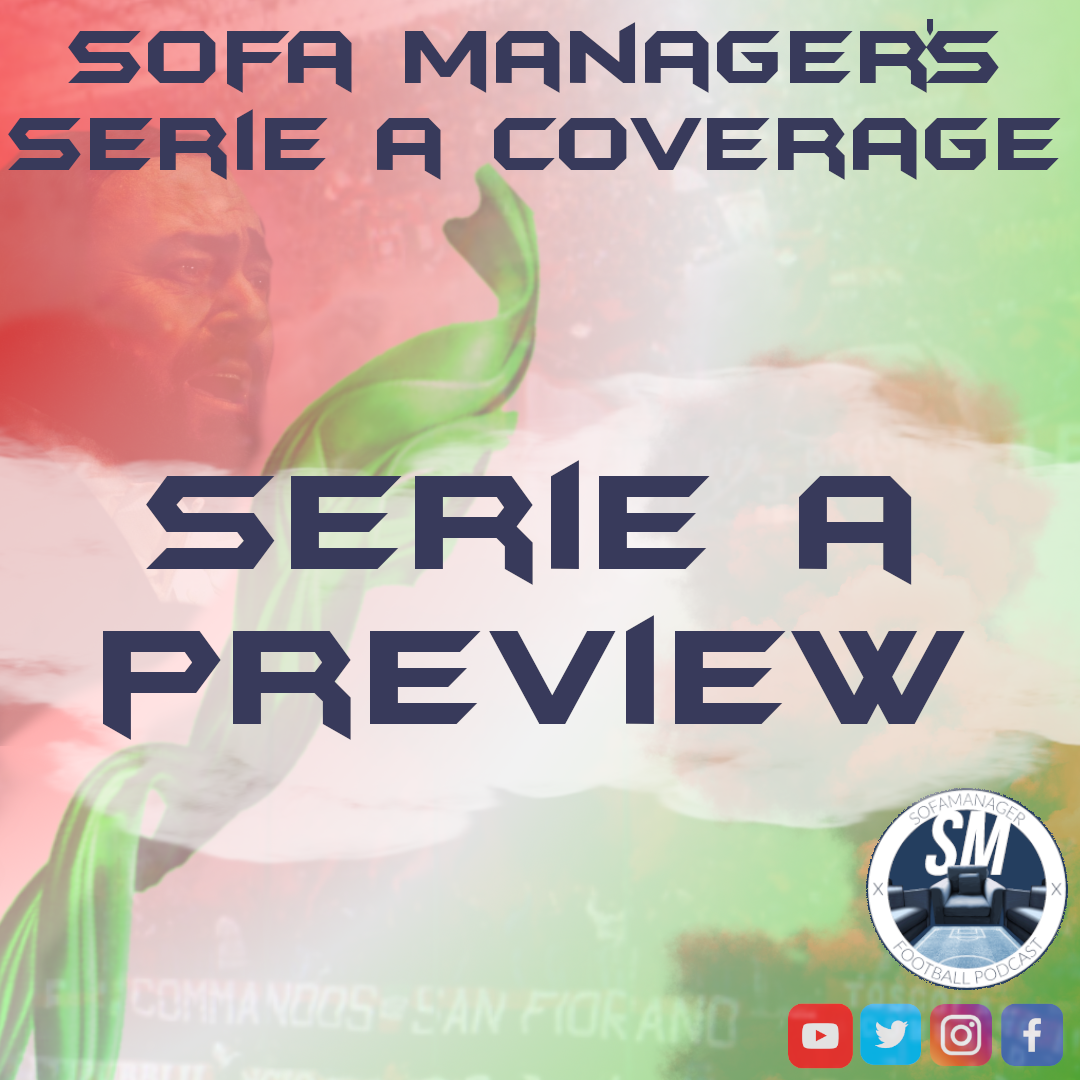 This is arguably my favourite time of the footballing year. We have a mere week or so left until the Summer Transfer Window closes and the rumour mill is in over-drive. Most clubs across Europe are at least a week into the season with squads all but assembled. It would therefore be remiss of me to not try my hand a bit of a preview of my favourite of them all – Serie A.

Last season can be looked at in two ways; it was really refreshing to see someone other than Juventus winning the Scudetto, but also Juventus were pretty poor both in Serie A and in Europe. They did, however, win Coppa Italia. This season, I do make them favourites to re-take their Serie A crown back from Inter Milan.

There’s two reasons for this. The first is the deconstruction of the Inter Milan team, and second is the retention of Ronaldo (so far) and Dybala. Add to that the recent signing of Manuel Locatelli and having Morata back on loan from Atletico Madrid; i Bianconeri is looking good. To me, once again, Juve have a strong squad that should conquer the domestic scene.

Certainly Juventus have a better feel to them versus last season but I do feel that’s also helped by the weakening of Inter. Yes, their Balance Sheet is probably looking more palatable but the first team squad not so much. Lukaku going for £100m to Chelsea is obscene and I don’t blame them for taking the money. Likewise the £50m for Hakimi to PSG. What must be less acceptable for the Nerazzurri is the fact Edin Dzeko replaces Lukaku and Denzel Dumfries from PSV will be the attacker of choice down the right. Two good players but it’s a comparative Benidorm tribute act compared to the real deal.

Juventus and Inter Milan will more than likely find themselves 1st and 2nd. But who finishes in the European qualification spots is a hot contest. To me, there won’t be a huge amount between AC Milan, Roma, Lazio, and Atalanta.

Roma, from the outside anyway, are quite an interesting prospect. With Jose Mourinho back in Italian football it’s really make-or-break for his reputation. Certainly Italian football of old suits his defensive style; just see how well he did with Inter Milan. They’ve also recruited a couple of interesting players namely Rui Patricio to likely be Number 1 while Tammy Abraham coming in from Chelsea is a game-changer. Don’t forget Spinazzola, El Shaarawy, and Pellegrini are all still at Roma. Mourinho cannot complain about not having a strong squad.

AC Milan are another in for a strong season. Giroud could end up being the signing of the season in Serie A while Florenzi arriving recently from Roma on a Free Transfer is tasty. Of course losing Donnarumma and Calhanoglu is a big loss from the squad which did so well last season – that cannot be ignored. And speaking of clubs who the “big spenders” of Europe are looking to be pillaged, Atalanta’s loss of Cristian Romero and Pierluigi Gollini to Tottenham might not be the final losses to their squad over the summer. Still, if they keep the bulk of the squad together and maintain their positivity there’s no reason not to expect another top-4 finish. It’s a big if though.

Jumping back down to Rome and the other side of the Tiber, Lazio are ones to really keep an eye on. Inzaghi is out and Sarri is in which has everyone eager to see what Lazio will accomplish this season. Le Aquile potentially have one of the stronger spines in Italy. You’re looking at Immobile leading the line, Milinkovic-Savic running midfield, and Acerbi the linchpin at the back. Felipe Anderson has re-joined after an underwhelming time at West Ham while Pedro joins from Roma. Looking at their squad there’s a lot to like there!

The attention Sassuolo have been getting this summer has only really surrounded the inevitable departure of Manuel Locatelli. And I suppose for Sassuolo they’re probably thankful that circus has moved on. Sure it’s a huge loss but there’s a lot in that team to be excited about. Berardi will still be in attack while Consigli remains Number 1. I wouldn’t be hugely surprised to see them push for a Europa League place this season.

However, it’s Napoli I’m less convinced about. The big thing for them is having Luciano Spalletti in the dugout. Spalletti has won the Coppa Italia twice with Roma and had tremendous success with Zenit in the Russian Premier League. That mentality will be required in a Napoli team which is looking tired. I actually think they have decent quality in defence but it’s the attacking players which don’t carry the same weight. Dries Mertens is now 34 while Insigne is only as effective as the quality supporting him. I’m not sure Napoli carry that much of a threat to push high up the league.

Ehm yeah, the usual teams that won’t quite be strong enough to push for the European places but too good to be dragged into the relegation fight. Udinese – despite not having a lot of recognised defenders – will be fine. Fiorentina normally do okay but not great, why expect anything different? As a guy with a vested interest in Scottish football we all want to see Bologna do well with Aaron Hickey in their squad.

One team worth maybe keeping an eye on is Sampdoria. To me, they have a reasonably decent squad. Falcone is a good ‘keeper for that level. Yoshida and Murillo aren’t terrible defenders. Candreva, Damsgaard (that guy from the Denmark Euro 2020 squad!), Morten Thorsby who is a beast on FM19 run the midfield. They perhaps lack in the final third. Fabio Quagliarella is a pensioner now and Gabbiadini has never been the same since his failed time at Southampton. I don’t know if they’ll emulate the 9th place finish from last season but won’t be far off.

A curious one for me is Hellas Verona. If nothing else, I am determined to get to Italy this season and Verona is very much on the list of places to visit. So I want them to do well so I’m going out to watch (hopefully) a good team. No reason why they can’t have a good season either. Kalinic will likely be leading the line to emulate his 15 goals last season. The signing of Ivan Ilic from Manchester City is huge for their midfield – quite literally at over 6ft.

The first port of call is Genoa. While their housemates, Sampdoria, are probably in for a reasonable season, Genoa are not. It’s all well and good having a quality home kit but I fear they don’t have the quality of team to match it. Eldor Shomurodov heading to Roma is a blow as is Zapata electing to head to San Lorenzo. I’m not saying it’ll be a relegation scrap but certainly don’t expect them to be pulling up trees.

In a similar vein, Cagliari are more than likely going to linger down the bottom half of the table. They have one or two “names” such as Diego Godin and Kevin Strootman that offer experience at the expense of legs. Goals will be at a premium as well. None of Farias, Pavoletti, Simeone, nor Ceter hit double-figures in goals last season.

I mentioned earlier about Scottish connections. Empoli are another which a few of us will we be keeping an eye on as Liam Henderson continues to live the Italian lifestyle (and who can blame him!). Empoli are now his 4th Italian team after spells at Bari, Verona, and Lecce over the last 3 years. Does that mean they’re going to be any good? In short no. But of the 3 sides that were promoted to Serie A for this season, Empoli have the best chance of staying up, come on Hendo!!

If I’ve been able to keep you reading until now then happy days! For we are left with the sides I believe will be fighting a relegation battle this season. Provided I have done this right, we’re left with Torino, Venezia, Salernitana, and Spezia. Try picking three of the four to be relegated…

Being bold, Torino are the more likely to stay up purely because they’ve had this fight last season already and they still have Andrea Belotti leading the line. The incomings thus far have been few and far between while losing Sirigu to Genoa leaves Vanja Milinkovic-Savic to resume goalkeeping duties. But because it’s Torino and they are a bigger name in Italian football they may just survive, again.

Alas that leaves Venezia, Salernitana and Spezia facing a quick return to Serie B. It will go down to the wire but it’s likely they’ll be propping up the league. For Venezia, yes they’re spending but if the American owner reckons a few guys from the MLS is good enough then he could be in for a shock. Venezia are the fairytale story lately but it’s got vibes of Blackpool in the English Premier League all those seasons ago. A few shocks along the way but ultimately coming up short.

Salernitana are really the same story as Venezia, just with less money. It’ll be gutsy, it’ll be close, but it’ll be a nearly story. Spezia meanwhile will simply be that side which drifts along and has a difficult Second Act in Serie A. There’s no shame in it guys.