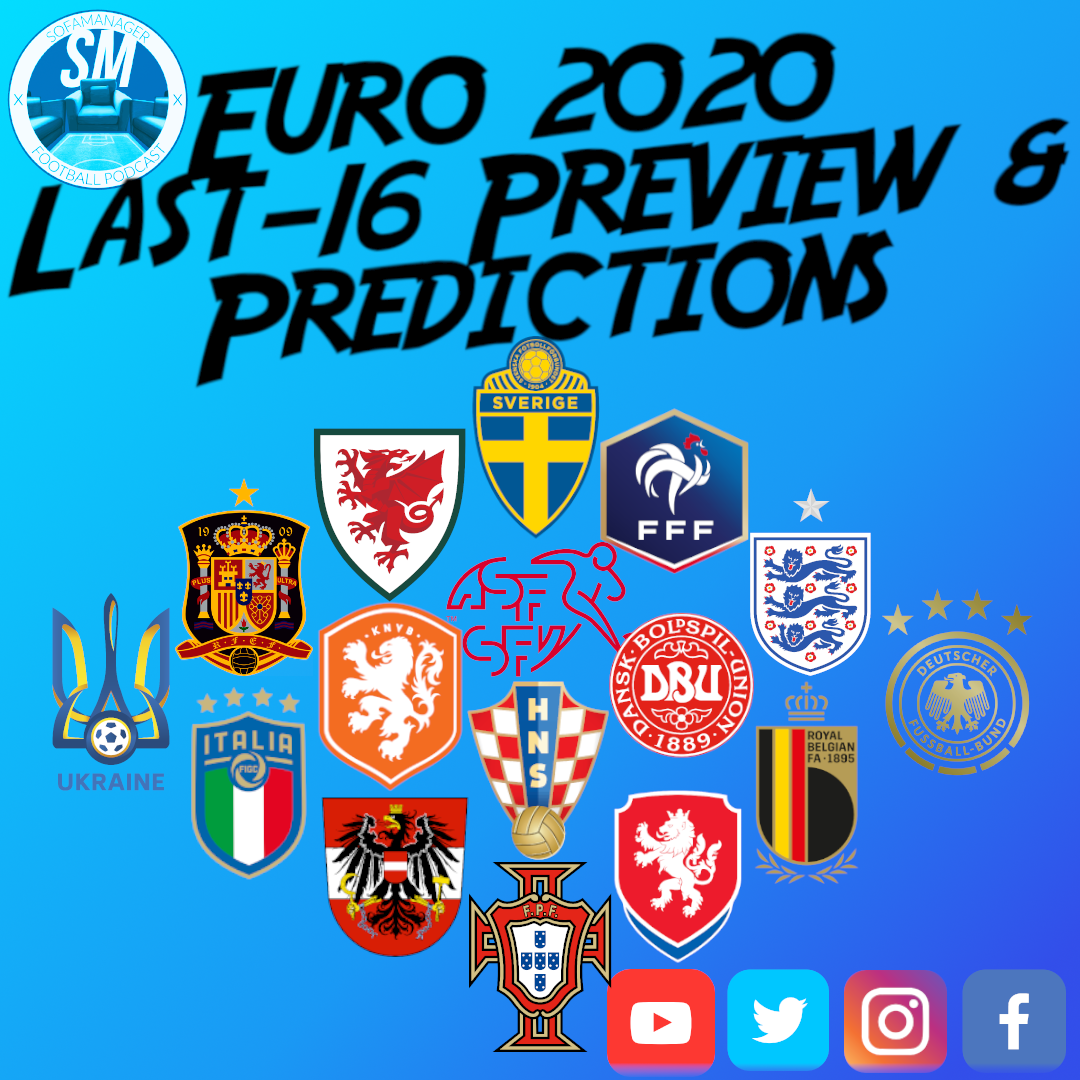 We’ve got eight games to get through so I’ll try to be short, sharp, and to the point. Denmark will win this. They have the momentum, a team full of excellent players who all play for each other, and have Christian Eriksen cheering them on from the sidelines. I also want to see Wales knocked out at the earliest possible opportunity. So come on Denmark, do it for Scotland! Make us feel better! 2-0 Denmark! Aaargh!

I will go into this game a little more because I have a soft spot for both nations. First up is Italy whom look the real deal from their Group Stage performances. I know they didn’t have a ‘big’ nation in there with them but they just looked so good. There’s goals in that side while maintaining that engrained solid defence. And Mancini is one of the best managers in the business. Austria, meanwhile, were a little hot and cold in Group C. Seeing off North Macedonia took a little while but the job was done. Defeat against The Netherlands was no shock and they really ought to have scored more against Ukraine.

It’ll be a tougher game than Italy have faced previously and the first outside of Rome. Whether that’s a factor it’s hard to say. Nevertheless I would anticipate Italy revert to type, win 1-0, and go through to the Quarter Finals.

Now this becomes a very interesting game. The Czechs certainly held their own in Group D and seen off Scotland with ease. The draw with Croatia took them to 4 points and runners-up and so the England loss was immaterial. Are they a nation to be feared? I’d say not really. But what is strange is that I would say the same of The Netherlands. I’m still not convinced by them and the near collapse against Ukraine is something to consider.

Yet the Dutch have goals in that squad. Depay has been having a really impressive tournament which is great to see and flashes of Wijnaldum give a glimpse of why PSG offered him top dollar to join them next season. So with that I’ll say Netherlands to win 2-1. Won’t be easy but I think this could be a great watch.

God please let this be a wonderful game, full of goals, attacking play, and a high tempo. Some see both these nations as possible winners of Euro 2020 and therefore hope this will be a barnstorming game. I desperately want it to be because Portugal in particular at this stage of tournaments become a nightmare to watch. It’s slow. It’s negative, It’s play-acting and time-wasting. Eye-bleedingly bad to watch! It could well be a game of whether or not Belgium and keep Ronaldo quiet and simultaneously break down Portugal.

Biggest cliche in football but an early goal is the key for Belgium. IF Portugal do end up in this ridiculous park the bus routine then an early goal forces them out. if Belgium fail to do that we could easy find ourselves watching the first penalty shoot-out of Euro 2020. I’ll be optimistic, however, and say 2-1 Belgium.

It should have been Scotland!!! I won’t be watching this, it will be too painful. Frankly I hope Spain tear them to shreds the same way they embarrassed Slovakia in Group E. I doubt that will happen. Watching Croatia through Group D was quite insightful of a nation who has gone all the way in a major tournament. They were poor against England in the opening game; very half-paced and out of character. They never chased for an equaliser and happy to have kept it at 1-0. They ramped it up a little more against Czech Republic but only to get the draw. Then bam! It’s the Croatia of old against Scotland.

My assumption is Croatia sat and targeted a points total, the games to obtain those points, and executed it perfectly. Spain on the other hand made heavier work of it. Playing in the heat of Seville for 3 games must have been tough and there’s doubts over their ability in the final third. This is tough to call. I’m saying 1-0 Croatia with Modric scoring.

Quite honestly France should have nothing to fear going into this game. Granted the French haven’t really asserted themselves on the tournament in the same way Italy have, but Group F was littered with obstacles to overcome. Defeating Germany with room to spare looked promising/ominous depending on your viewpoint. But the 1-1 draw with Hungary and then making heavy work of Portugal poured cold water on that. Quite simply they have to go out and run all over Switzerland to stamp their authority on Euro 2020 once more. 3-0 win.

Oh great, another 90 minutes of England singing the German Bomber song to a quarter full Wembley. A rivalry England love to hate and the Germans…probably don’t care. A defeat for England here and it’s obvious glee for every other Home Nation but does pile a lot of pressure on Southgate. Germany didn’t have a great Group Stage but again, like France, I think they’re just delighted to get through.

Considering Germany you have to focus on the Portugal game above all else. They dominated once Portugal were sussed out. Attacking wing-backs tore it up and there was a bit of the old Germany in there. I hope that shows again against England. As for the home side, the only way they are winning this is to be on the front-foot straight away. England cannot afford to allow Germany to apply any pressure on their back 3 and Pickford. Nobody has properly tested them yet and England is in for a nasty surprise when someone (hopefully Germany) do so. Optimistic here and going for 2-0 Germany.

A game nobody other than Sweden or Ukraine care about. Again, it should have been Scotland but I’m not bitter. Such a strange combination as well. Sweden; a continual figure in International Tournaments synonymous with meatballs and flat-pack furniture. Ukraine; a nation in chaos and in need of something to bring a bit of hope back the country. And the south side of Glasgow; a war-torn landscape in love with processed food and flat-pack furniture.

That aside I want to say these are two fairly even sides. I don’t think we’ve seen Ukraine at their best while Sweden did okay in Group E, but not great. This could go to extra-time and penalties so I’ll say 1-1 after 90 minutes with Sweden edging through. If only Zlatan had been 5 years younger and fit to play.