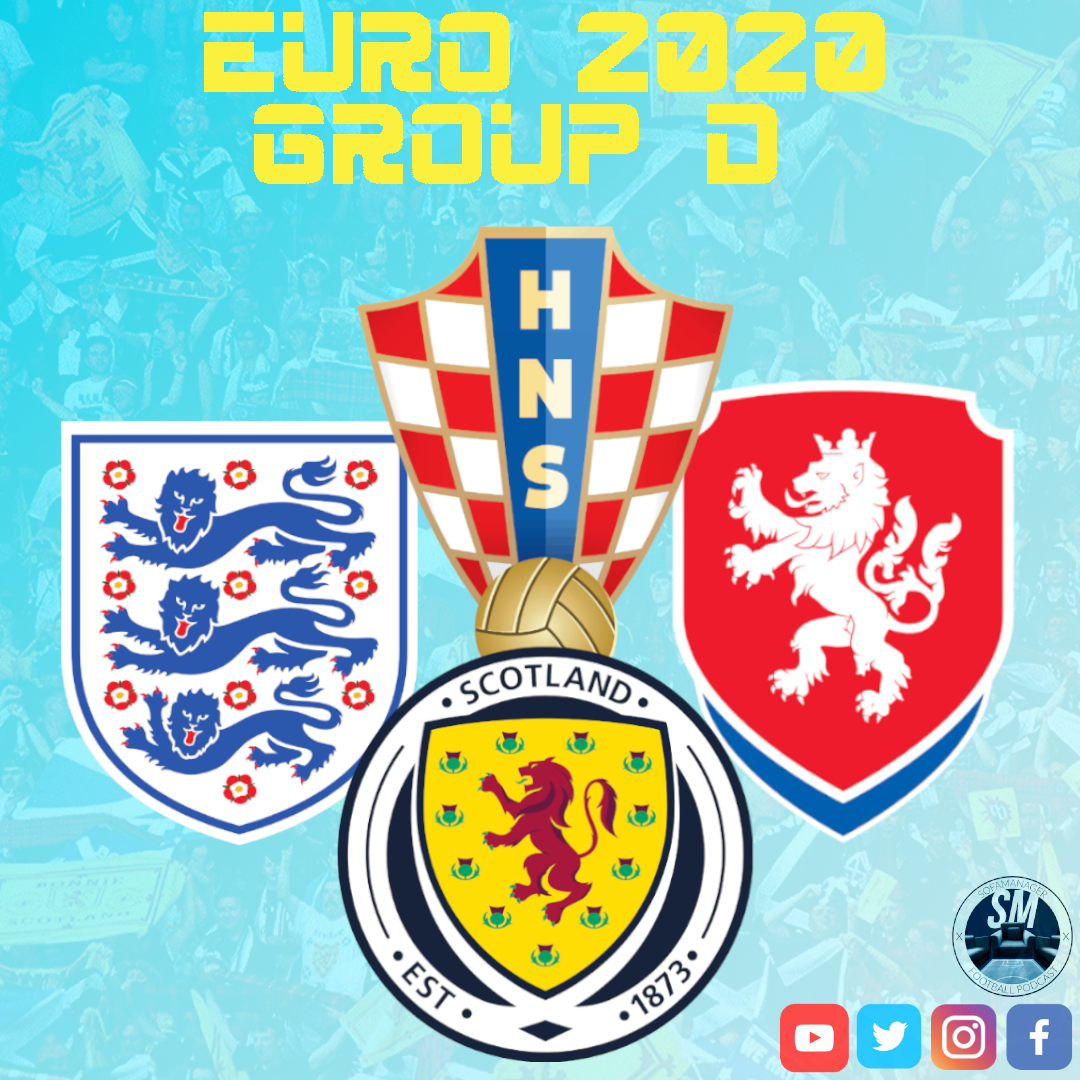 I’ll say from the outset that while I will try to be completely unbiased in Group D, I do have a bit of an agenda here. If this had been any other Group in any other tournament I would have an anyone but England mantra. However, Scotland actually made it to a tournament so it’s now Scotland to win, and then anyone but England. Enter Croatia. World Cup Finalists in 2018, victors over England in the Semi-finals, and all round brilliant nation. An aging squad, perhaps, but that should only become a serious issue the deeper into the tournament they go.

For the Group Stages the squad is sheer class from midfield to attack. Modric (Real Madrid), Kovacic (Chelsea), Brozovic and Perisic (Inter Milan), Kramaric (Hoffenhiem), and Rebic (AC Milan). Granted that talent is offset slightly by their defensive talents which include Rangers’ left-back Borna Barasic – very good player in the Scottish Premiership but it’s still the Scottish Premiership. Croatia, like the Czech Republic might also benefit from the fact Scotland and England will be more interested in beating each other that the focus (and media pressure) is directed elsewhere.

The Czechs are getting the usual incorrect treatment by the British press which makes me quite uncomfortable. The Scots keep pointing to their recent good record against them while England are typically dismissive of anyone other than the big nations. Scotland scraped by a 3rd string Czech side in 2020 due to Covid while we had a full-strength side in Olomouc. The return game at Hampden was a slim 1-0 win for Scotland against a stronger Czech team. Both sides will fancy their face-off at Hampden in Game 1 as the best opportunity to get their (only?) win.

Indeed you could probably draw a bit of comparison between the make-up of the Czechs with the Scots. A smattering of players from huge European clubs supported by a larger domestic contingent. Granted I don’t know how comfortable some of the Slavia Prague players will feel arriving back in Glasgow following the Kudela/Kamara incident. That could be interesting to say the least.

Welcome to the bi-annual deckchair throwing contest, sponsored by Carling-fuelled England fans. Weeks of ‘It’s Coming Home’ ‘Three Lions’ ‘Southgate’s Magic Waistcoat’. Makes me physically sick. Or it does right up to the point of crescendo where songs are at their loudest, fever-pitch has been reached and BAM! England are knocked-out by the Semi-finals. Drink in all those tears.

Aye they’ve got a good squad; another ‘golden’ generation reaching their peak. Aye they’re playing it down a little with a somewhat arrogant theme of ‘we’ll get to the Semi-finals and see what happens’. However, it’s said with a wry smile and a cockiness of expectation that once again this is their time. A condescending tone when literally any other nation is discussed; amplified when it’s a wee irrelevant nation mighty England will sweep aside. Good on you sons of King George, you just keep that rhetoric up; us Scots will see you in the pub watching Croatia and Czech Republic progress through instead of us xo

23 years of missing out on international tournaments is over! Scotland fans can finally get ourselves worked into a frenzy about giving the European stage a taste of hoofball and a right good physical challenge once again. Czech Republic at Hampden? Ach we’ve beaten them before, 3 points surely! England at Wembley? Anything can happen! Croatia back at Hampden again? Home advantage will see us through! Don’t know about you but I’m sold.

In truth this is the strongest Scotland team I can think of since 2007 where we nearly made it to Euro 2008. There’s an element to the Scotland team that should be capable of turning up and doing something at this level. Quite whether they will or not is up for debate. Historically, Scotland’s best players come a cropper when the limelight is on them. All the attention will be on Andy Robertson (Liverpool), Tierney (Arsenal), McGinn (Aston Villa), McTominay (Manchester United), Stuart Armstrong, Che Adams (Southampton), and Liam Cooper (Leeds United). All English Premier League starters – some even as captain. It’s our own psychology which will be our downfall.

Being level-headed this is a tough group to predict. England host Croatia in Game 1 and will likely be the game that will determine the winner of Group D. I think England might win it but it’s so difficult to call. The other Game 1 in Group D is Scotland v Czech Republic in Glasgow. Again, very tight to call but I’m going to say Scotland 1-0. Game 2 then sees England v Scotland at Wembley which England will win, annoyingly. Meanwhile Croatia and Czech Republic meet at Hampden in another quite interesting tie. This is where Croatia will get their first 3 points.

Game 3 will have everyone still having something to play for. Scotland finish up at Hampden against Croatia where Scotland will need at least a point to progress, make a meal of it, at lose to Croatia. All the while England will again play at Wembley against Czech Republic in another game they should win. That’ll have England top the group and play the runner-up of Group F (so France, Germany, or Portugal)…do you see the logic now? Croatia finish 2nd and play the runner-up of Group E and a much easier tie, comparatively. Scotland might get through as a 3rd place best finisher but quite unlikely.