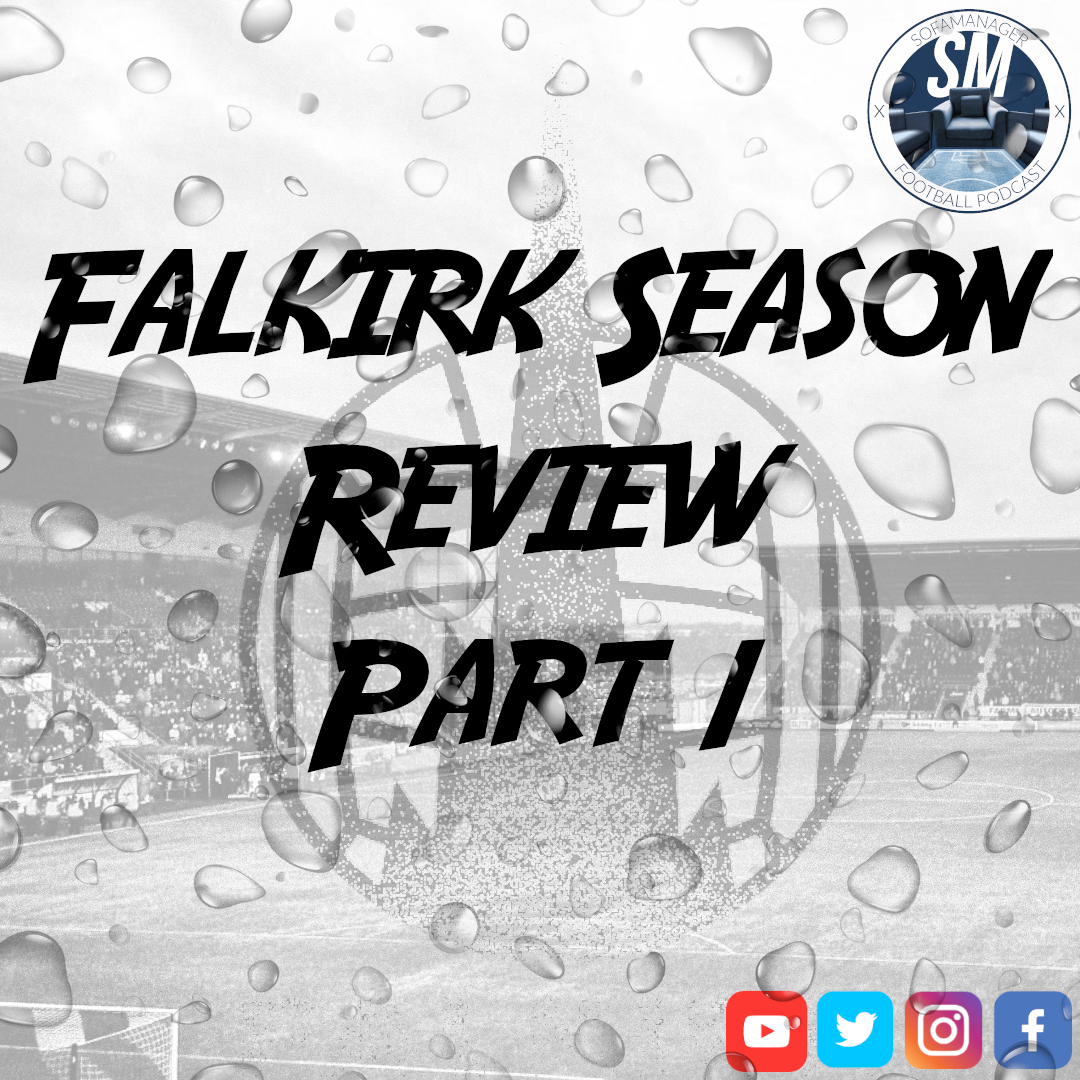 My god where on earth do we begin with this? I’ve been a Falkirk season ticket holder since 2003 in what now looks like the glory years. I was there when we won the league in 02/03 at Brockville, the league again in 04/05, the Challenge Cup in 04/05, witnessed the remarkable 3-2 win away to Hibs in 2005, Antony Stokes double hat-trick against Dundee United and then Dunfermline in 2006, all the way through to Cup Semi-finals and the Scottish Cup finals in 2009 and 2015. But then the Great Highland Escape in 2009 and ultimate heartbreak in Premiership relegation in 2010. The oh-so-nearly moments that became the norm through 2012 to 2018 when the bottle crashed against Dundee United in the play-offs. At 27 years of age I feel like I’ve been through the ringer.

This season has tipped me over the edge. Not in to a fit of fury and rage. That happened when we inexplicably lost the plot against Dundee United in the play-offs. No, it’s now a move from anger and disappointment to apathy and an acceptance we, as a club, are a laughing stock in Scottish football. It’s perhaps one of the biggest bottle crashes in Scottish football history when looking at the last 5 to 10 years. For cathartic reasons I’m going to walk us through the disgrace of this season.

Omnishambles – informal. A situation that has been comprehensively mismanaged, characterised by a string of blunders and miscalculations.

Malcom Tucker in The Thick of It

There won’t be many rushing out to buy the commemorative DVD of this season that’s for damn sure. Everything that could have went wrong pretty much did. An omnishambles if you prefer. Recruitment both in the summer and January, the appointment of Miller & McCracken, bringing Gary Holt back to the club, Gary Deans playing victim in the summer, floodlight failure, injuries to ‘key’ players and a dereliction of duty from those who were ‘fit’. I’m sure there’s more embarrassing facets I’m deliberately forgetting!

I will say from the off that this is not the way any Falkirk fan wanted the tenure of M&M to pan out. I genuinely hope in the fullness of time Miller and McCracken are viewed as good players during an enjoyable period watching Falkirk. I can’t say it’s been enjoyable at all watching their managerial debuts, however.

Naïve as I was, I thought this would’ve made a good partnership. Miller as a well-renowned forward in Scottish football and McCracken played at all levels as a centre-back. You hoped with their background and experience they’d carry that into management. But there was literally no identity whatsoever to Falkirk’s play throughout the season. Tactically inept; an inability to recognise where things weren’t working. That also morphed into a more and more insipid style of hoofball that you would not believe until you’ve witnessed it.

It became quite obvious, quite quickly, that M&M were not cut out for this level. Falkirk in League 1 is not the place a new pair of head coaches should be cutting their teeth. I don’t blame them for taking the role; at the time I think Falkirk fans were grateful to have two familiar faces in the dug-out. I do blame the board for being reckless enough to not have any real scrutiny over performances and feeling among the support. In truth, M&M should have been relieved of their duties before the shutdown in January. We were top of the league not because we were good, but because we were less awful than the rest of the league.

It comes hand-in-hand with the management. Callumn Morrison is the only acceptable performer this season. A case could be made for Robbie Mutch and Charlie Telfer, and to a lesser degree Mo Gomis and Paul Dixon. The rest have been a real disappointment. Blair Alston is the obvious one to single out. A guy who stepped from the Premiership with Hamilton down to League 1 with Falkirk should not just disappear during matches. Alston has utterly destroyed any premonition of being a good player. Mark Durnan was a liability all season and doesn’t seem to learn from mistake after mistake. All our striking options were hapless and the defence had more holes in it than Dominic Cummings explaining his trip to Barnard Castle.

I don’t want this to get personal but it’s difficult to describe how insulting it was to watch them play for Falkirk. The lack of any remote interest from any of them was beyond a joke. If any of us showed up to work with the same attitude they showed on the pitch even the Job Centre would tell you to leave. Some of the squad are simply not good enough for this level and that’s fine, it’s not really their fault. Players like Robbie Leitch and Akeel Francis sadly might not have a future in the game. Gary Miller, Connor Sammon, Scott Mercer, Sean Kelly are others who’s footballing careers are at an end.

Thinly veiled swipe at Liam Miller (who?) incoming. It’s the blunder every pundit or ex-footballer with an opinion makes. If this answer to “have you watched Falkirk lately?” is “No” then you don’t get to slag off fans for wanting the management team to go! Of course, results were sufficient enough to keep Falkirk top of the league for a while. I assure you, however, the performances did not. It felt like an inevitability the arse would collapse out of this season.

Quite honestly the best performance we had this season was away at Celtic. It was the first and only time where the side showed a bit of dig and tenacity. Granted Celtic could have scored 8 or 9 that night but there was a different feel to watching Falkirk. Perhaps a spirited performance that we could have built upon. Alas that didn’t happen. Performances remained staggeringly poor across the board as we got closer and closer to the end. By the time we played Cove in the first game of the split the form guide pointed in one direction – down.

Robbie’s had a few clangers this season, it cannot be ignored. He finds himself in the spotlight even more because the whole defensive unit was dreadful and it’s an easy stick to beat the team with. I will, however, defend him a bit here – certainly better than Durnan and Hall did. He’s 22 years old, a pretty decent shot stopper, and was the only player in a lot of games who looked like he gave a toss. He would potentially be my number 1 again next season on the assumption a backup ‘keeper and goalkeeping coach are brought in during the summer.

Left-back is no longer a suitable position for Dixon in my opinion. He doesn’t have the same stamina or pace or ability to really get up the park. Disagree? Watch every single cross Dixon put in during the last 2 seasons and tell me how many of them weren’t from deep. Put him in at centre-back and I would maybe feel differently about him staying.

Man alive, he cannot defend. Across the whole defence Falkirk could not, COULD NOT, defend a cross ball. I have no idea where Ben may end up during the summer but my guess it will not be full-time football. It sure as hell won’t be Falkirk. I don’t necessarily think it was an attitude thing either – as is the case for a few in here – Hall is just not capable of playing in Scottish League 1.

The personification of “hold my beer” to the quip that Ben Hall is the worst defender I’ve seen at Falkirk. Didn’t feel confident when we signed him and I was right. I just don’t understand why, after so many sending offs, he does not learn from his mistakes?!?!?!

You know, I feel sorry Gomis. In his heart he wants to tear it up. In his head he’s technically great. But in his legs there’s no energy left. Certainly not enough energy to cover the ground of the two shiftless bodies either side of him. I don’t think he was all that fit after the restart and it culminated in red cards for late challenges and understandable frustration. I have no problems with Mo and wish him the best of luck.

Gary Miller could quite easily be my most disliked Falkirk player of all time. Call yourself a captain of Falkirk? Miller certainly encapsulated the lethargic, aimless, gutless, spineless performances throughout the season. An alleged captain who made 1 (one) Falkirk TV post-match interview this season and that was against Dunfermline in the League Cup 6 months ago! Nah sorry but Gary Miller was the 2nd biggest disappointment this season.

Because the single biggest disappointment this season was Blair Alston. An absolute shadow of the player who left in 2016 to join St. Johnstone. Actually even a shadow of the player he was when he was at Hamilton just last season. I think we’re all stunned how it’s panned out and scratching our heads asking why? There has to be something beyond football for him to be this anonymous for an entire season, has to be.

I find it hard to criticise him at all. His work rate was first class, fed off scraps at best, and still got us goals. Rumour is he has a non-promotion break clause in his contract which I fully expect him to execute and end up somewhere like Partick Thistle. Him and Zak Rudden would be an interesting combination – oh what could have been.

Trading on past glories the big man. Can’t jump despite being the size he is. Can’t trap the ball. Can’t be bothered unless it’s an inch perfect pass to feet (something our tactics did not lend to). Can’t really do anything. He got a few goals but missed a ton more. Just another severe let down when you consider the career he’s had. I hoped for a lot more, but it did look like he wanted that weekly wage to tide him over and nothing else.

Take your pick. 3 young guys who I hope have a few Nat Fives or Standard Grades tucked away somewhere. Dowds and Keena had patchy seasons and never got to play together so it’s all a bit meh with them. Kai, meanwhile, will do well to go back to Dundee United, work his backside off, and ensure he never ever finds himself in the same environment he’s just experienced at Falkirk. If he wanted to see what happens when you don’t care then he got a baptism of fire!

It felt good to get this season off my chest. Naturally I’m sure there’s elements you disagree with and that’s totally fine, that’s football. For non-Falkirk fans who may be reading I hope I’ve given a glimpse into the anger suffered this season and you’re able to read through your tears of laughter. As well as with my Therapist, I’m working through my issues with the wider context of the club and I hope to have this published early next week. In the meantime have a Good Morning, a Good Afternoon, and a Good Evening.