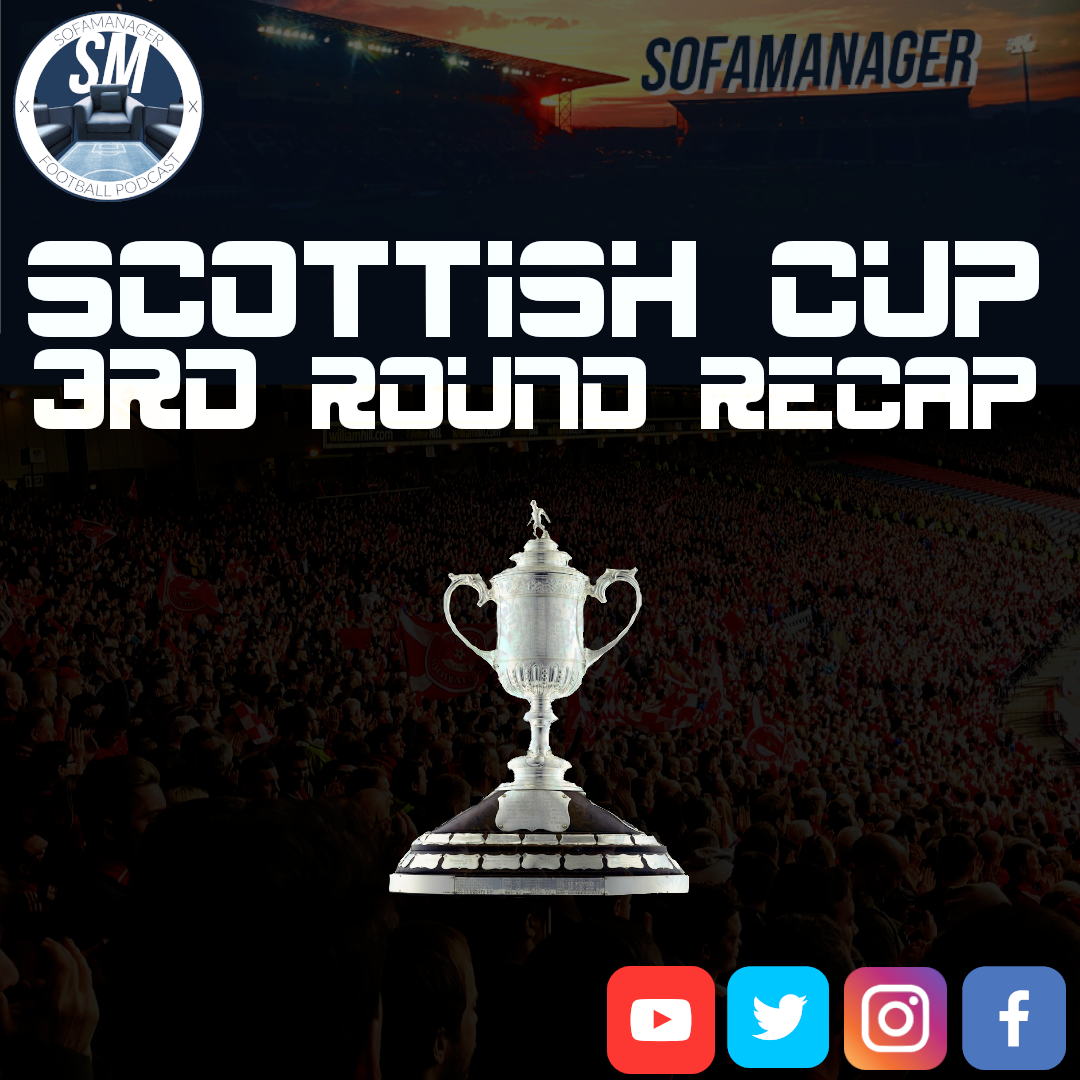 Our first proper blog post in god knows how long! I therefore apologise profusely for any and all spelling and grammar mistakes that are sure to be littered throughout. Nevertheless, we soldier on and look back on the weekends Scottish Cup 3rd round results by creating a starting 11 and 5 subs to from the 16 winners heading into the next round. I’ll say from the start this was much more difficult than I anticipated…

This was absolutely not a classic. Awful would be more accurate and picking an Aberdeen player was a real struggle. What swung in Joe’s favour is a fantastic save early into the 2nd half while the game was 0-0 and Aberdeen toiling. Dumbarton’s Rabin Omar looked odds on to score but for Joe Lewis matching the shot down to his left side from close range. Excellent save and the reason Aberdeen progress.

Bit of a tough call between Jon Guthrie as centre-back, try fit Sibbald in, or take the opportunity of filling a full-back position with Jacko. Because I’ve set a rather stupid challenge here, it’s Jackson Longridge at left-back. And it’s based mostly on the second half performance as Livi were pretty guff in the first. Some of the standout moments for Longridge were his waltzing run into the box and almost getting an equaliser and some very decent play between him and Sibbald to move Livi up the park.

A Tayside derby but by no means a classic going by the highlights. And from reading the Pie & Bovril forum next to nobody came out of the game smelling of roses. Nevertheless, I’ve got to pick someone from the winning side and it’s Jason Kerr. Stevie May will get the assist for the goal but it was Kerr’s launched pass up to the forward which got St. Johnstone up the park for Melamed’s finish. Special mention to Zander Clark for both being penalty hero and complete liability – some boi.

Ehm, yes, this particular game and player choice is the first time you will question what on earth you’re reading. It was a struggle to pick any standout from the Highland derby for many reasons. I watched the game hoping for a thrilling blood and thunder game but it kind of fell flat. Not a terrible game, but it lacked an atmosphere to make the game more of a spectacle. Anyway, that’s enough characters. Devine is a defender on the winning team, objective met.

A proper cup tie with plenty goals, a red card, overhead kick goal, and the drama of penalties. Add in some cracking weather and you can help but wish to have been there; quite similar to the tie at Fraserburgh for that kind of feeling. I will also say thank you to Roberto Nditi for scoring a belter of a goal and giving me an easy pick at Right-back. I couldn’t really find much other reaction to the game so he may have had a stinker of a game otherwise but I don’t care.

This was a tough call between Allan Campbell and Steven Lawless for the standout Motherwell player. However, for his goal and assist Campbell edges it for me. A comfortable win for the Premiership side, never in doubt, not much else to say other than well done on living up to expectations. Good, next.

Two struggling teams in their respective divisions meeting at Somerset Park was never going to be a classic. It’s Clyde, however, going through after Cuddihy grabbed the only goal of the game after 4 (four) minutes. Given the reports of the game, Clyde’s victory was also down to the ‘dirty work’ of Kevin Nicoll in midfield. The particular highlight being his last-gasp

From the Saturday evening fixture, David Turnbull gave his Scotland credentials another shot in the arm as Celtic tossed Falkirk aside. A 3-0 win was certainly a fair result for Celtic on the evening and Turnbull ran the show. I was really impressed by his continual drive from midfield into the attack which unsettled the ultra-defensive shape of Falkirk. Without him you do wonder whether the intensity of the Celtic attack would have persisted the full 90 minutes.

A breeze for Rangers against Cove in the Sunday fixture and a bit of a ‘take your pick’ from the attacking players. Defoe’s goal was a superb strike, Roofe grabbed a double, and Nathan Patterson stole the 4th. For me, however, Scott Wright pulled the strings in the first half (and I know it’ll annoy Paul greatly having him in the team). The playmaker had some terrific link-up play and a hand in at least 2 of the goals.

The first striker of the Eleven had to be Kyle Lafferty for notching a hattrick against Stenhousemuir. Yes, it was only Stenny but a hattrick in a game which could’ve been so easily a banana skin is just what the Killie fans wanted. A penalty, first-time strike, and a tap-in from Chris Burke’s break into the box did the damage. Job done, really.

And the final name making our starting XI is none other than Martin Boyle. I know what you’re thinking ‘he’s not a striker!‘ and maybe you’re right. But he was the biggest attacking threat Hibs carried for vast swathes of the Monday night fixture. Doidge may have grabbed a brace but other than that was fairly quiet; it was Boyle who got Hibs up the park all game. Top player and a standout as always.

I do think Alnwick is a bit underrated in the Scottish game so I’m sticking him in here. He pulled off a few pretty decent saves at critical times in the match, keeping St. Mirren ahead. McGrath, if you’re reading this, can maybe feel a bit aggrieved – and I loved his first goal – but Alnwick is as big a reason the Buddies are in the next round.

The United v Thistle game was comfortably the worst possible game to pick a ‘star’ player. God awful from both sides, United absolutely did not deserve to win, and the ref had a shocker for the United winner (clear push by Clarke). Nobody stood out. “Insipid” was the word one United fan has described it on Pie & Bovril so I don’t feel any selection can be made here; but a few lols were had reading the forum!

Feel like saying see above in all honesty. East Fife should have won in the 90 minutes but blew it right at the death by giving a penalty away. Game goes to ET, which is far from ideal for both sides, and Robbie Muirhead grabs the winner to take eh ‘ton into the next round. Umm what else…good luck to East Fife as they try to play Tuesday, Thursday, Saturday from now until the end of the season?

This was a tough one to pick. Not because there was a lot of candidates, but rather a complete dearth of information/highlights/comments about the game. From the somewhat scant BBC highlights, Thomas Orr gets into the side for Stranraer thanks to a terrific goal to seal the 3-1 victory. Potentially worth the 6 hour bus journey up to the Highlands?

We’re all missing being at the football and watching the highlights from the tie in Fraserburgh just made it all the worse! A glorious sunny day, in a very idyllic place in the world [when it is sunny], on a decent pitch and above all else goals. The Mighty Mo’ coming out on top against their Highland League opponents with the goal of the Round coming from Russell McLean’s overhead kick from near 18 yards out. You can’t not have him in the 4th round squad after that!