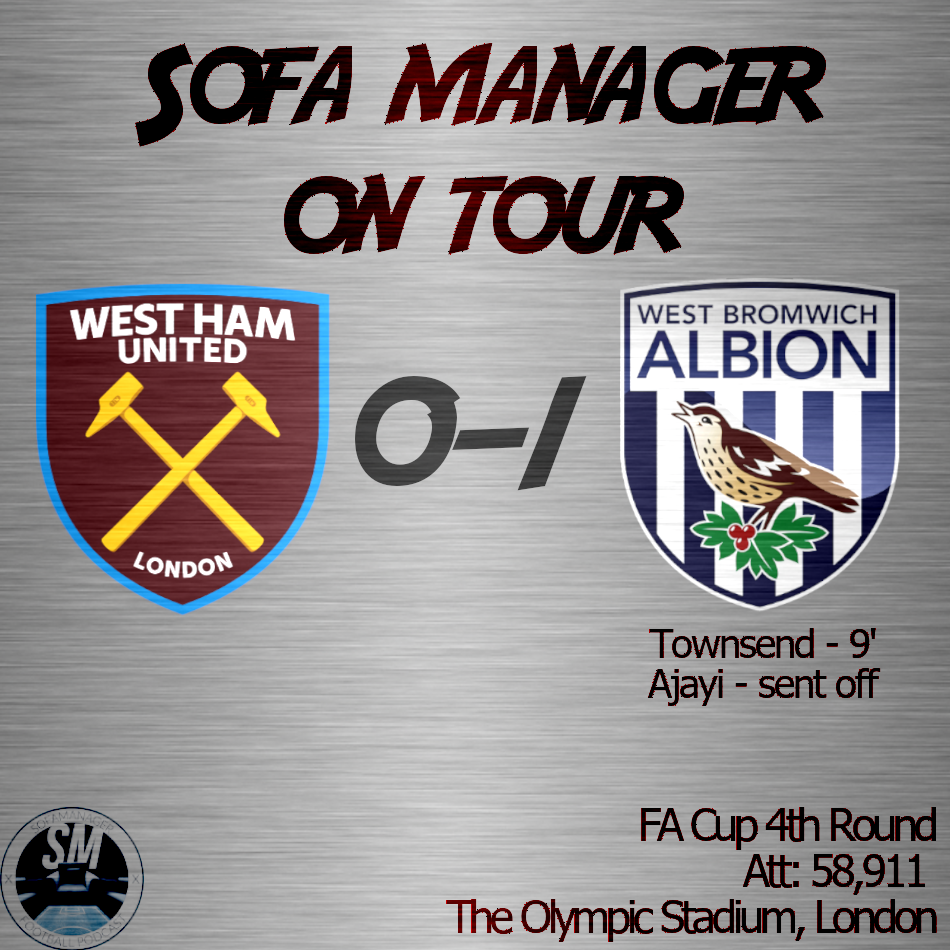 This weekend is an ever so slight step-up from last weeks’ trip to Welling United in the National League South. This weekend I had the pleasure of heading to my first ever FA Cup 4th round tie, and my second outing to the London Stadium where Premier League West Ham hosted Championship West Brom. Although within the first few minutes, it was hard to tell which was which; but we’ll get to that!

I want to say from the outset that I thought – from a neutrals perspective – it was an entertaining game. However, before I get into that, I want to have a bit of a rant at whomever came up with the ‘entry system’ to the stadium; for that individual is a textbook health and safety headbanger. I’ve been to some big games and stadiums in my time; Scottish Cup Finals, Play-off final at Wembley, San Siro, Stadio Olimpico for the Rome derby, Olympiastadion in Berlin. All of which were fantastic venues and seamless to get in to.

And yet while the London Stadium is a really impressive stadium (jury’s still out on it being a good football ground), it’s an utter shambles getting in and out. If you ever get the chance to go, honestly arrive with a good 45 minutes to spare otherwise you will miss the start of the game. It took about 20 minutes to queue before the turnstiles to be ‘checked’ by a security man who had about as much interest in searching you, as you did in what he had for lunch. You then get stuck in another unorganised queue for the turnstile, missing the first few minutes of the game. JOKE!

Take that out of the equation and like I said previous, a really quite enjoyable game. I appreciate if you’re a West Ham fan reading this you’ll completely disagree, but as a Baggie or a neutral it was well worth the £25. My seat, once I found it, had a cracking view in the lower tier of the Billy Bonds Stand; although I can’t imagine the view is at all great from either end or being in the upper tier. I imagine it to be like watching 22 pins move on a 4inch screen.

To the game and I don’t think anyone could argue that West Brom were the better side throughout. The Hammers looked nervy and very reluctant to get stuck in – no Mark Noble or Antonio starting – which West Brom took full advantage of. Some extremely slack passing and frankly shocking levels of interest and application from a rank rotten Sanchez really summarised the first half for the home side. Balbuena at the back was equally culpable and Declan Rice never lived up to the pre-match hype.

Less than 10 minutes and West Brom had their deserved lead. For me, it all stemmed from Sanchez being weak and lazy in midfield allowing Krovinovic to break forward, find Austin and who’s deflected touch fell to Townsend. His touch and blazing shot from the edge of the box gave Randolph no chance while exposing everything wrong with West Ham. The Baggies remained on top for the first half and I’m still wondering how Charlie Austin never scored from his free header around 25 minutes in.

The West Ham fans around me were utterly livid and I had to be quite careful because West Brom were playing some really good football. Trying to disguise excitement with a shake of the head which could mean either ‘what’s he playing at?!’ or ‘how did he miss?!’ is a difficult act. But I’m still alive so it must’ve worked! It was really difficult not to find yourself enjoying the game. The first half ended to a chorus of boos and a rather odd race between a mascot dressed as a hammer, and the other as a boiler…if someone can catch me up on this, I would be very grateful.

Second half and a needed triple substitution for West Ham. Balbuena for Ogbonna at the back was a gimmie while Sanchez being replaced by Mr West Ham, Mark Noble should’ve occurred after 5 minutes quite honestly. The third was the addition of Antonio for Fornals. Absolutely no doubt Antonio needed to be brought on but I thought Ajeti, and particularly Lanzini, should’ve been off before Fornals. But you could’ve emptied the whole XI.

The changes gave a bit of spark to the crowd, yet West Brom still looked more likely to score. Krovinovic stood out as their main threat with some really dangerous 15/20 yard burst through the middle sucking the Hammers defence towards him and leaving space for the wide men on the counter. Charlie Austin was even finding space, it’s just a good job he can’t finish or the game would’ve been well over. Indeed they could’ve been made to pay for the missed chances when Ajayi was sent off for a 2nd yellow with 20 minutes to go. In my view, both yellows were deserved.

To shore up the defence, West Brom brought on a familiar face to Scottish football with former Rangers loanee, Kyle Bartley. A bit of a ‘remember him?’ moment. Fundamentally, however, the sending off didn’t change much of the game. West Ham were playing so poorly, and so damn narrow, it maybe helped West Brom concentrate on simply getting behind the ball and defending with the 10 men. There wasn’t a hope in hell the home side were going to break them down.

At 1-0 and all the chances missed, you always think there will be one moment when it bites you. And well into injury time hearts must’ve been in mouths in the away end when Antonio’s deflected cross fell perfectly for Mark Noble. All he had to do was guide it home from 12 yards out – too easy. Instead, he found himself leaning back and side-footing it well over. It really did sum up the afternoon for West Ham in that nothing, even absolute gifts, would fall for them. In the end, West Brom secured a 1-0 win and their place in the next round of the FA Cup.