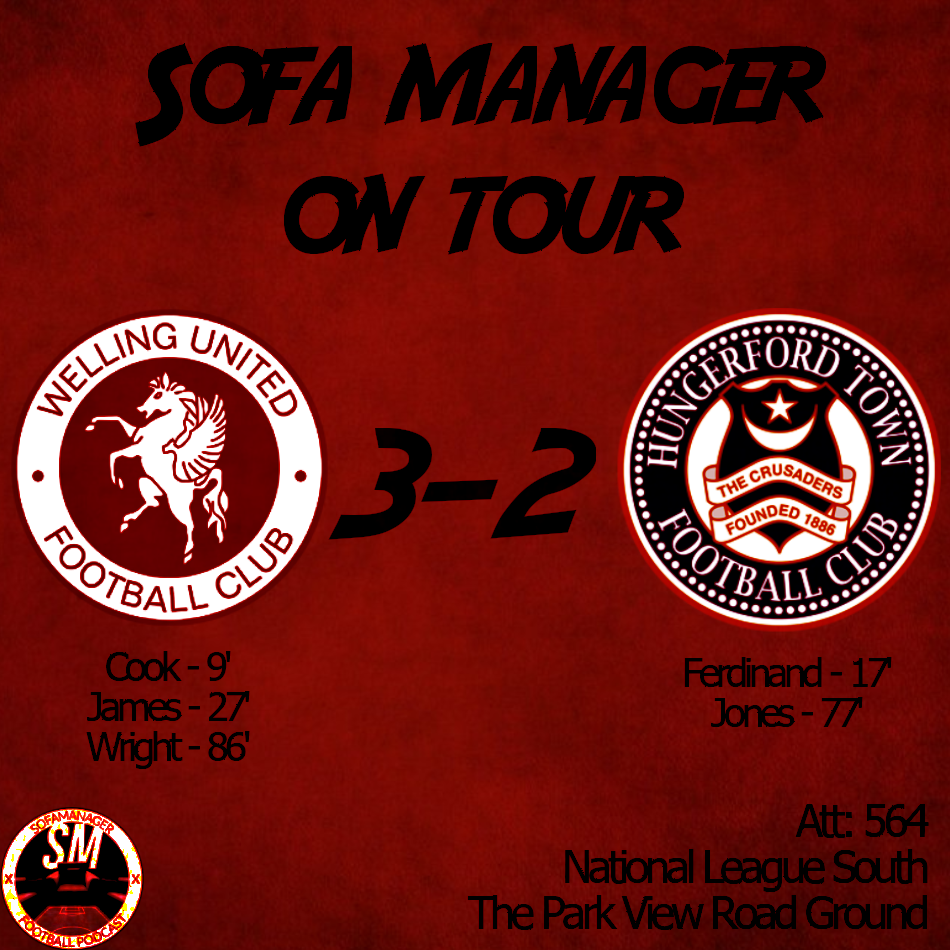 Welcome to another instalment of Sofa Manager On Tour! Although this is becoming more Sofa Manager in London…but there’s so many stadiums, at so many different levels, that it’s honestly baffling how anyone can get round them all. However, I’ve been using the Futbology App to keep loose tabs on where I’ve been and what’s nearby but I’ve barely scratched the surface. I know London is a big place but I highly doubt there’s a city in Europe with quite the concentration of clubs at a level above Sunday League.

While last time it was all about Charlton Athletic v West Brom in the FA Cup, I decided to keep it fairly local to where I am and headed to Welling. Nestled in South East London, The Park View Road Ground was pretty straightforward to get to (with the bus stop literally at the turnstile) and I have to say it was a pretty decent wee ground. I’ve been to some utter holes in my time (looking at you, Cowdenbeath) and while a lick of paint and a leaf blower wouldn’t go a miss, it had everything you need for the 6th tier of English football.

It was also only £13 to get in – which for around here is incredibly cheap – so I couldn’t complain. The one thing I really do like at this level is you can usually walk the whole perimeter of the park, allowing you to switch sides at half-time. A real novelty. I started off in the better kept ‘road’ end where Welling were attacking in the first half and switched to the more sheltered but more, lets say rugged, end. There’s also a pronounced slope running down the length of the park which really took the ‘shooting down the hill’ cliché to a new level.

But to the game itself and this was a huge game at the bottom of National League South. Hungerford are marooned at the bottom of the league and without a win since the beginning of December. Welling aren’t fairing much better; coming into the game 7 losses on the bounce. I will admit to not knowing any of this before going to the game and I’m not going to lie, it could’ve easily changed my mind on attending. But I’m glad I didn’t!

It was honestly end-to-end stuff. Welling took the lead within 10 minutes thanks to a huge deflection leaving the ‘keeper wrong-footed and the defence looking like fools. Undoubtedly the home side were the better team and, not knowing their previous form, thought ‘these guys must be doing quite well this season…’. But they sat back and Hungerford pulled level not long after; defending really wasn’t either sides strong point. At 1-1 it became an enjoyable watch with both sides quite capable of a result.

But the moment of the match was Welling United’s second goal. Welling’s midfielder, Cameron James, collected the ball on the half way line and took it for a walk right through the Hungerford defence, slotting home from about 6 yards out. Incredible solo effort to put the Mighty Wings back into the lead going into the break. And yes, that’s one of the best nicknames for a club in the UK; Tom Cruise is a fan, apparently.

2-1 at at the break and a jaunt round to the other end. However, and this is me being stubborn, but I’ll never get over the disappointment of not getting a Scotch pie at halftime. Instead, it’s chips and a pint but I still miss the Russian Roulette of getting a pie at somewhere like Starks Park and pondering when (not if) I would regret it.

Compared with the first half, the second was a bit more lethargic. Welling had a vital lead to hang on to and were attacking up the equivalent of Scaffel Pike. Hungerford were struggling as well but did get a bit of a break with 20 minutes remaining. Matt Jones for the away side managed to take a lovely wee touch to tee-up his half volley into the bottom corner. Another well taken goal, only adding to my confusion when I seen the league positions.

Welling rallied and with a few minutes to go, they managed to get the all important winner. Again, very neat build-up play got their man to the by-line, square it and allow Wright to tap home. Welling taking the lead for the third time and did enough to hold on. Hungerford looked seriously deflated once the 3rd went in.

And that, ladies and gents, was my trip to The Park View Road Ground. If I get the chance again, I’ll certainly be back and would highly recommend it if you’re in and around South East London and don’t want to pay £30 for Millwall v Reading. At Welling, you’re given the freedom to roam the terracing with a pint watching entertaining football with the potential for a few meaty challenges. I’ll admit the quality compared to other teams nearby was obviously not as good; but that’s not the purpose of this level. It’s all about watching someone get their legs taken and not even get booked.