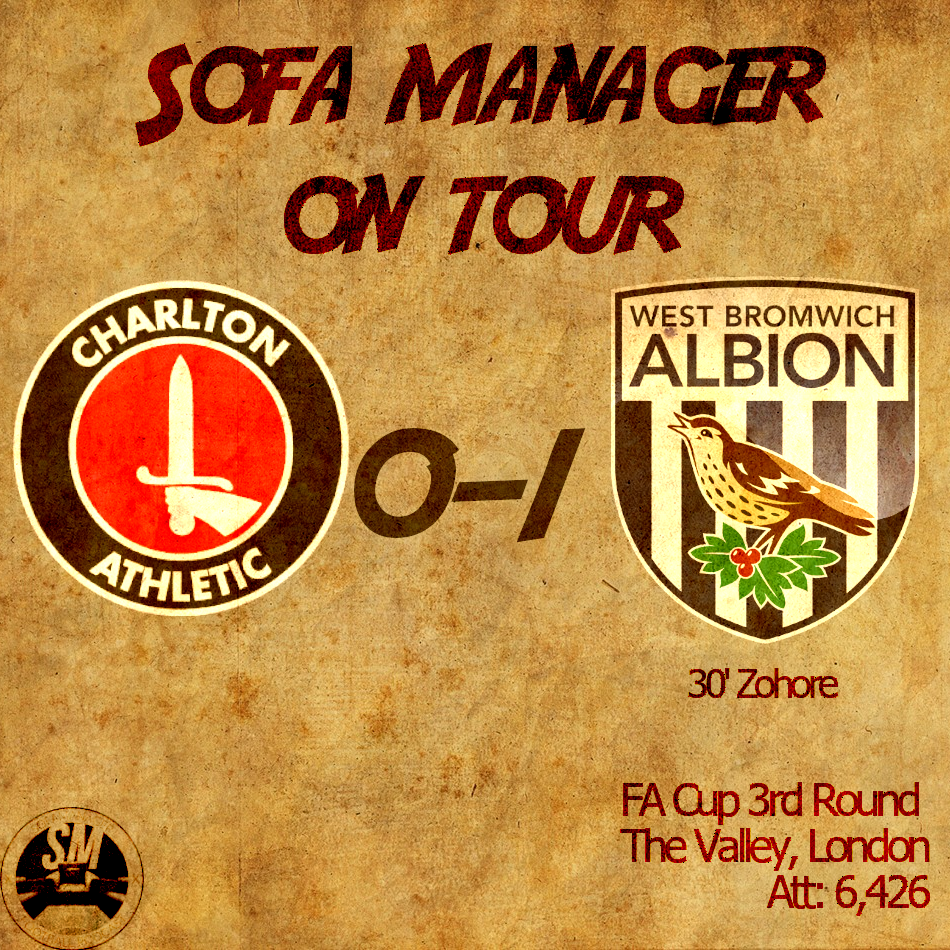 New year, same rejuvenated me…or at least for a couple more weeks anyway. It’s the time of the year where most of us make some loose obligation to improve ourselves or to acheive something; usually far flung and completely unachievable like ‘go for a jog‘, ‘eat a salad(!?)‘, ‘don’t f*cking swear so much!‘, that kind of thing. Impossible. My resolution this year is to simply get to the football as much as possible. Achievable and with enough wiggle room for the odd hungover Saturday when tea and Jeff Stelling is the order of the day.

The resolution kicked off at The Valley where Charlton hosted West Brom in the FA Cup 3rd Round. Perhaps not the most glamourous of ties, particularly when they meet again next week, but they’re now my local team when I’m down in London. I also can’t say no to a cheap ticket given how stupidly expensive everything is!

Charlton went with a more youthful/fringe player line-up which I imagine was down more to necessity than choice. There’s a bit of a queue forming for the Charlton physio and it’s been showing in their recent form. The only real positive was the return of talisman midfielder Jonny Williams who returned from a fairly lengthy period out. Darren Philips, Naby Sarr, and Chris Solly were the only well-known faces – to me, anyway. The Baggies were completely the opposite. A near full strength XI with some familiar faces such as Charlie Austin, Gareth Barry, and Chris Brunt starting. At this point I fully expected West Brom to really wipe the floor with Charlton.

But for all the big names in the away side, they didn’t quite have enough to really blow Charlton away. Granted, West Brom near totally controlled possession in the first half with some neat play but I’d give a lot of credit to Charlton’s youngsters who defended well, broke up play, and made for a tough opponent. The breakthrough was inevitible but it did take some fantastic link-up play to finally allow Zohore to get the only goal of the game after 30 minutes. West Brom took a deserved lead into the break but as I said, they struggled to create anything clear-cut in the Charlton box.

The second half started with Charlton more offensive. Not quite the all or nothing approach but certainly more adventurous and allowed the youngsters a chance to prove themselves. It made for a far more entertaining game which was helped by the total wind-up merchant that is Charlie Austin to get a bit of stick from the home fans. For some reason, he’s considered the Kris Boyd of English football…Can’t think why?

West Brom probably/definitely should have got at least a second with some of the incredible chances passed up, including Austin missing from 2 yards out and also hitting the post. A second may well have been deserved too given their control over the game. But the fact is they didn’t (you don’t get that kind of analysis from Michael Owen). Why? Two things, really. First is some heroic defending from Naby Sarr to block certain goals, and the second is West Brom themselves who did ease off in sizeable spells in the game which killed any real momentum.

Their re-match next week will be completely different in the league – not least the fact there’ll be about 10,000 more through the turnstiles. Charlton will field a much stronger side while I’m sure West Brom will come with a lot more energy and tempo…I’m beginning to think I picked the wrong game to go to?!

As for next week, I’m not overly sure where’ll I end up. The biggest issue with London is while public transport is pretty good, it takes FOREVER to get anywhere. Leyton Orient v Grimsby is a shout as is Dartford v Oxford City. Brentford v QPR would’ve been an interesting game but there’s no danger of me getting there for a 12:30 start. I mean I’m committed to groundhopping, but not that much!