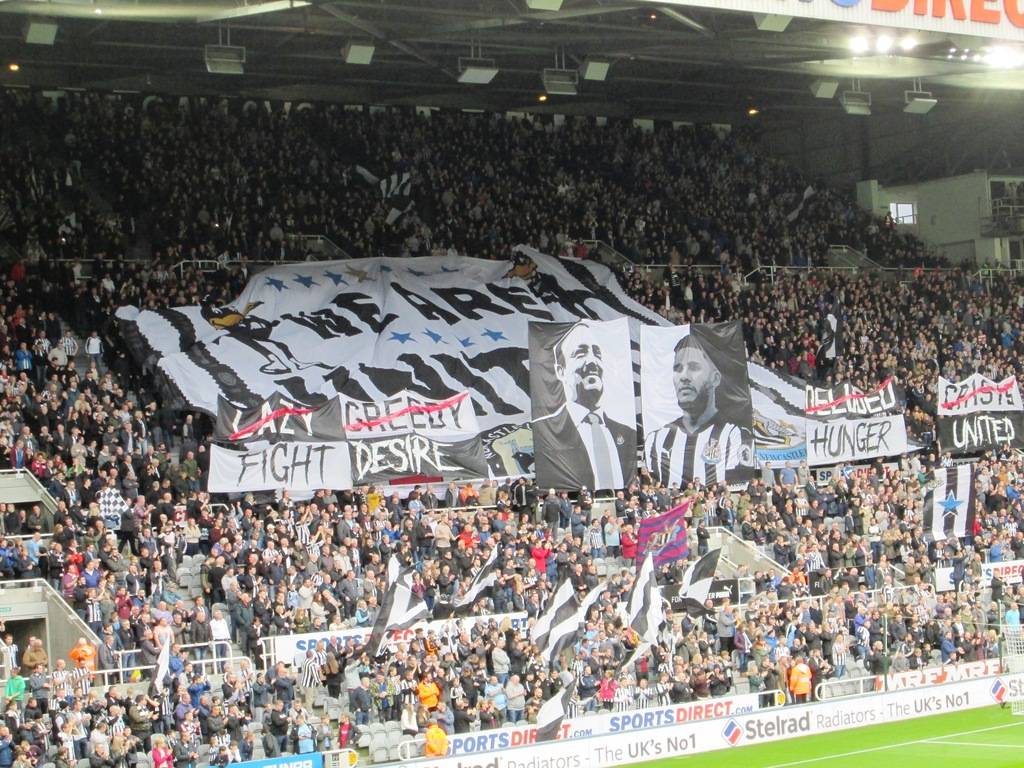 Exams are over!!! Well for the semester at least; but at long, long last my evenings no longer include calculating the Net Present Value of a project nor learning the inner workings of the WTO. Instead, you now have my whole and undivided attention and to celebrate? a jaunt down the M6 to Wigan to see Newcastle take on the Lactics at the DW Stadium.

After hiding in the home end at Preston a couple of weeks ago, we managed to get ourselves into the away end along with the other 4,800 members of the Toon Army! Getting to the stadium was pretty easy, we stayed at a Premier Inn on the outskirts of the town and a 10 minute taxi got us right to the door with minimum fuss. Well apart from sharing with a guy who claimed to be from Newcastle but spoke with an altering Glaswegian and Geordie accent, maybe he was just confused around us Jocks. From the outside the DW Stadium itself is well designed and surrounded by a retail park which maybe gives it an isolated feel but well designed nonetheless. Newcastle were given the North Stand behind the goal and a sea of black and white had it rocking! An unchanged side from last week seen the Diame/Gayle partnership continue up top with the former grabbing the first.

Breaking from just past the right, Diame – with Hayden in support – drove at the retreating Wigan back-line and a neat one-two with Hayden allowed Diame to work his way into the box, shrug of the defender and dispatch neatly into the bottom corner. Queue absolute bedlam in the away end as the Championship favourites took the lead although it felt more in relief than expectation. The rest of the first half was a fairly comfortable for Newcastle but a degree of complacency was beginning to creep in.

Second half proved to be a more difficult affair for Newcastle and full credit to Wigan who took a hold of the game and were unlucky not to score from a few good crosses into the box. Somehow however, Newcastle held out and finally put the game beyond doubt from substitute Atsu. A good flick on from Dummett found Gouffran on the break with the Frenchman cutting back to Diame. However, the ball fell just behind him and instead fell to Atsu and the winger dispatched a lethal shot to make it 2-0 and take the 3 points up the road to Tyneside to keep the lads on course to win the Championship. While it’s obviously great to get full points on the road I’m less convinced by the performance and not for the first time this season. First up I don’t think Rafa quite has the balance he’s looking for in that side and I wouldn’t be at all surprised if a few new faces were brought in, particularly another central midfielder and a wide right man with pace to compete with Ritchie. The game against Wigan was very interesting in terms of watching how, after going 1-0 up, the confidence – and at times overconfidence – of the players came out and it seemed as though they knew they had it won and never went for the jugular which killed the atmosphere a little. Then again maybe the fact Newcastle accounted for over a third of the overall attendance made it, overall, a straightforward evening. Onwards and upwards for Newcastle and the festive period sees an away trip to Burton followed by two home games against Sheffield Wednesday and Notts Forest.