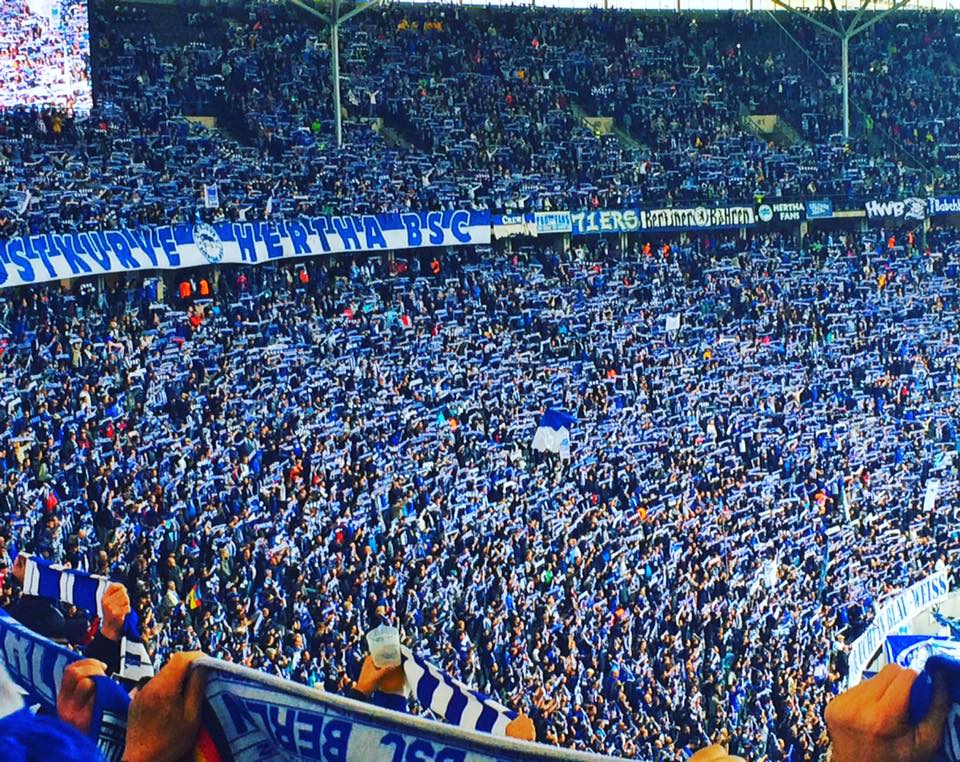 Falkirk away to St. Mirren or a city-break to Berlin to watch Hertha in the Olympiastadion. Tough choice that! Yes it’s time for the main event, the one I’m sure you’ve all been desperately waiting to read about. Over the weekend I traveled to the German capital for my first taste of the Bundesliga as home side Hertha Berlin welcomed Hamburg to the famous Olympiastadion. I’m still recovering so bare with me!

Urgh where to begin? I arrived Thursday afternoon and after checking in I couldn’t resist and jumped on the U-Bahn to the stadium; just for a sneak peak 😉 You arrive at the Eastern (Ost) end of the stadium and are immediately met with the reminder of this cauldron’s history with the Olympic rings dominating the skyline, suspended by two massive stone towers. After walking around and taking a jaunt along “Jesse-Owens Allee” it was time to head back and sample some of Berlin’s favourite bier.

Friday. Tourist stuff. Not important. But I did attend a 5th Division tie between Tennis-Borussia Berlin and Victoria Seelow.

However the climax of the trip; football day! I’m going to get this out the way first – you must if you haven’t already – get yourself over to any, ANY, Bundesliga game; you won’t be disappointed. I arrived back at the same dominating towers from Thursday only the gates were open and with ticket in hand, the Olympiastadion welcomed me in. Immediately grabbing a Berliner (the beer not a person) I found my seat and my word; what a view! I’m at the edge of the upper tier of the OstKurve with a fantastic view between the pitch and the Hertha Berlin supporters block. What’s really excellent about the Olympiastadion’s layout is you are able to walk around the stadium and take in the historic venues from the 1936 Olympics but also learn a little more about the perhaps the not so glamorous period during the reign of the National Socialists.

Here we go! Teams are out and so are the fans – 57,600 in total – with all of them in full voice. Full credit to the Hamburg fans who made the trip to the capital in huge numbers and were clearly up for it. However they were matched by the Hertha faithful and between the two groups it made for a cracking atmosphere. In the end Hertha won 2-0 thanks to a goal after 30 minutes as Ibisevic finally prodded home after a series of panic stricken deflections among the Hamburg defense. The second came from the spot as Stocker was brought down after a great piece of counter-attacking from Hertha and Ibisevic grabbed his second of the game. Hamburg did threaten with their best chance coming from a free-kick forcing a brilliant save from Jarstein.

So overall an important win for Hertha Berlin as they moved back into second in the Bundesliga and remain Bayern Munich’s closest competitors but for how long remains to be seen. That aside this was about as special a moment in football I’ve ever had; up there with the European nights with Newcastle United (remember them?) Falkirk’s triumph against Hibs in the Scottish Cup and beating Rangers (remember them?) in the league last season. I will most definitely be back in Germany to experience this wonderful league. Perhaps Dortmund…or Koln…or Eintracht Frankfurt…oh what about Wolfsburg…damn I forgot about……I will be back!