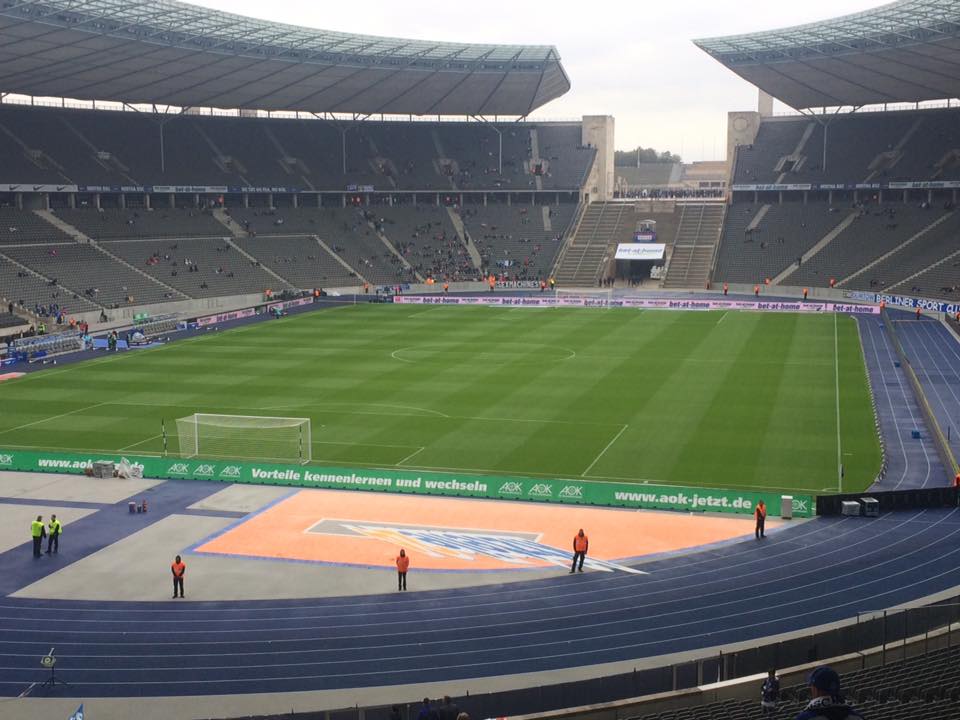 If you managed to grab a listen to this weeks Sofa Manager Podcast you’ll have heard that I (John) have booked himself a wee trip to Berlin to take in the sites and sounds of the German capital – but mainly for the football. Actually only really for the football. There’s many a reason for choosing Berlin that may not be obvious at first. I’m sure you’re thinking “Germany? Surely somewhere like Bayern Munich or Dortmund are much more appealing” and I would normally agree. Going to Bayern Munich and Dortmund are most definitely on the list of places to go but there’s something more appealing about going to Hertha Berlin – maybe its the overall cost of the trip haha!

I’ll start with the concrete giant that is the Olympiastadion. Built for the 1936 Berlin Olympic Games, there is so much history and grandeur to this historic landmark from Jesse Owens winning 4 golds in 100m, 200m, Long Jump and 4 x 100m relay to hosting one of the most captivating World Cup Finals in history as Italy defeated France in 2006. Most recently the Olympiastadion hosted the Champions League Final between Juventus and Barcelona and Berlin played host to Barcelona completing an historic treble after league and cup success.

Then there’s Berlin itself; a city with more history than you’d care to imagine! Destroyed in 1945 by advancing Allied forces, the city – once divided – is now a buzzing city full of culture and terrific architecture running along the river Spree. Personally I can’t wait to see infamous sites such as the Brandenburg Gate, Checkpoint Charlie and the Reichstag Building but I’m fascinated by World War II so perhaps not the guy to go on holiday with!

Travel seems to be pretty easy too. Direct flights to Schoenefeld Airport from Edinburgh at a reasonable price combined with plenty of hotels to choose from. There’s also this really innovative idea in Berlin for those going to the Hertha Berlin games that entitles them to free public transport on the day of the game to and from the stadium. I’d like to see you try get that in Edinburgh or Glasgow!

But lets be honest any new ground in a foreign country is the definition of “Away Days!” and I cannot wait to get to the Olympiastadion and experience the raw atmosphere of German football. If you are even remotely aware of football in Germany you’ll know that the fan culture is one of the best in the world and the model in Germany is something more leagues and clubs need to take a look at.