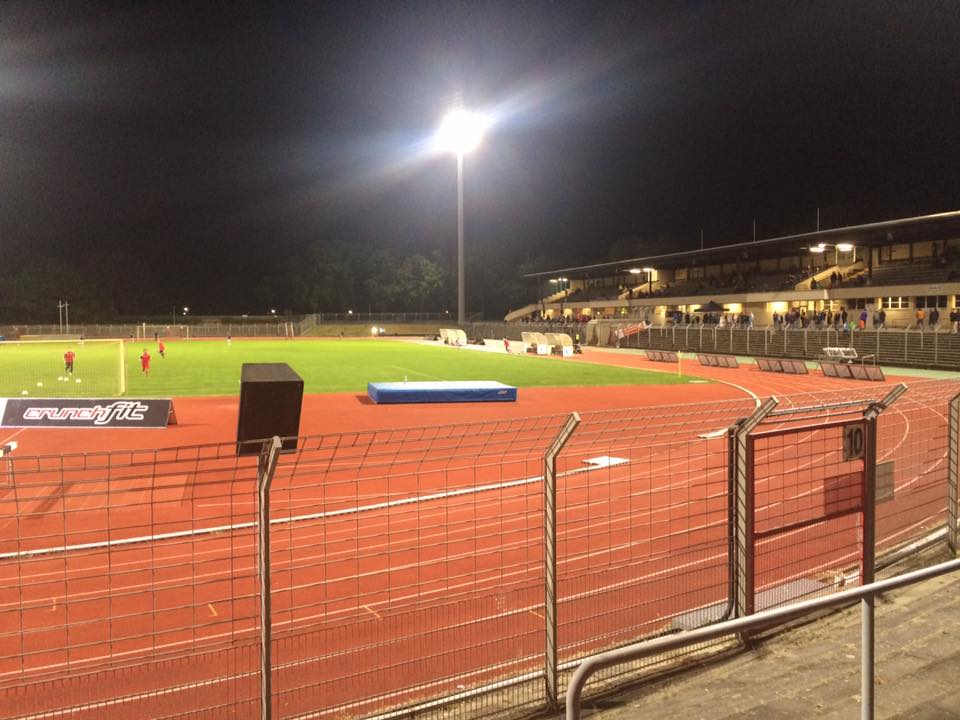 Sofa Managers very own JayBee (that’s me!) is on his holidays to Berlin to experience the sights and sounds of Germany’s historic capital and to behold the Olympiastadion as Hertha Berlin take on Hamburger SV. I’m a strange character, I’m not a huge fan of doing touristy things and I detest museums. I have the upmost respect for those who can survive for any more than an hour looking at a painting that could have been done by a 6-year-old. I just don’t get it. However, those who do enjoy a *pointless* walk around museums will likely question why on earth I flew all the way to Berlin not to admire the spectacle of the Brandenburg Gate (although it was very impressive) – but to spend my Friday evening at Tennis-Borussia Berlin versus Victoria Seelow in the NOFV-Oberliga Nord; the fifth tier in German football.

I had no idea what to expect but I headed along with an open mind and I have to say I quite enjoyed it. A quick Uber taxi out to the Mommsenstadion and only 9EUR to get in was pretty decent value. Okay I’ll admit there was a student rate at 6EUR but my German is nicht gut and I couldn’t face the embarrassing conversation that would follow. The Mommsenstadion can only be described as an athletics stadium with a football field in the middle but it kind of works. Where this set-up in Scotland usually means a wee stand on one side, the Mommsenstadion has old fashioned terracing right round the perimeter giving it a more football stadium feel.

The game kicks-off with the “DeBe” starting brighter and their right winger could give Usain Bolt a run for his money but it was plain to see why these teams play at the level they do. Several things stood out for me comparing it to what I reckon would be the equivalent in Scotland which would be lower League 1/League 2. First was the organisation of the teams. “DeBe” controlled the game and looked incredibly comfortable on the ball, almost too comfortable as it limited their directness and confidence to take a shot. Comparing this to Scotland it’s almost a foregone conclusion that after 3 or 4 passes there will be an aimless high ball seeking the ‘big man’ up top. Another thing was their basic technical ability and fitness. Both sides in-fact had a good formation and everyone looked to know their roles with maybe a couple of the Berlin players trying to do too much. Victoria Seelow came, sat back and looked to hit on the counter and if the final ball had been that little bit better they could have walked away with the win. Berlin on the other hand had the lion’s share of the ball but much like their opponents the vital final phase wasn’t up to scratch.

The game finished 0-0 and on balance I think a draw was fair enough. “DeBe” were in control, that can’t be argued, but they never tested the ‘keeper nearly enough. Berlin could have nicked in the end with the ball cleared off the line (I was too far away to comment) but it would have been rather unfair on Victoria Seelow. I would be really interested to see just where either side would fit in the hierarchy of Scottish football because I think they would compete well with the likes of Stenhousemuir/Stranraer/Clyde. Then again I could be completely wrong and Bo’ness United is more appropriate.

All in all I enjoyed my evening out at the Mommsenstadion and having a couple pints on the terraces made it a special experience. However, tomorrow is the big one; tomorrow I’m off to the Olympiastadion to see Hertha Berlin take on Hamburger SV. Checkpoint where?!